#2. The little league softball team that was coached by TE Greg Olsen was the special guests allowed to be on the sidelines today.  The faces these kids had as they interacted with the players were a joy to watch. There was also several members of the military here as well. They spoke with players like LB Luke Kuechly, RB Christian McCaffrey and LB Shaq Thompson during special teams drills.

#3. The team came out in shells again for practice. It was said on yesterday that today’s practice was going to be full pads. With Tuesday and Wednesday being joint practices with the Buffalo Bills it will be full pads worn for the final two days at Camp Wofford.

#5. These are the highlights from team drills: CB James Bradberry got a pass deflection in the end zone on a pass intended for WR DJ Moore thrown by Allen. Olsen caught a TD pass from Allen during red zone period. WR Curtis Samuel had a huge catch on a deep ball over CB Javien Elliott from a pass by Allen. Moore gets revenge on Bradberry by making an awesome catch on the sideline that included him tip toeing both feet before going out of bounds. WR Aldrick Robinson caught a TD pass from Allen while being covered by CB Josh Thorton. Olsen also caught a TD from Allen while beight tightly guarded by LB Shaq Thompson. McCaffrey caught a screen pass from Allen then took it all the way to the end zone.  Jackson bounced back by making a nice pass deflection will covering Hogan on a pass by QB Will Grier. CB Corn Elder made a perfect break on the ball to knock down a pass to WR Torrey Smith on a Grier pass. DB Cole Luke jumped up high and made a spectacular pass deflection on a QB Taylor Heinicke ball in the end zone meant for Hogan. Hogan made it for it by catching a TD over DB Rashaan Gaulden and S Colin Jones on a Grier deep ball. TE Chris Manhertz catches 2 TDs from Grier passes with one being over Kuechly and the other being over S Eric Reid. Boston got a pretty pass deflection while covering Samuel on a deep pass by Allen. LB Antoine Williams drop into coverage and made a pretty smooth INT on a Grier pass intended TE Jason Vander Lean.

#6. After practice was over Reid told every player in the secondary that they need to get the JUGGS machine out because they dropped several interceptions in practice today. This turned into a 30 minute session. LB Jermaine Carter Jr. left practice early with what seems to be a leg issue. Head coach Ron Rivera made it very clear that he will throw out any player who tries to fight during the joint practices with the Buffalo Bills. 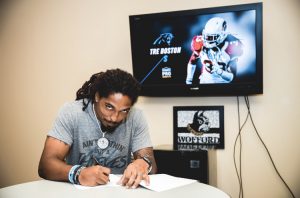 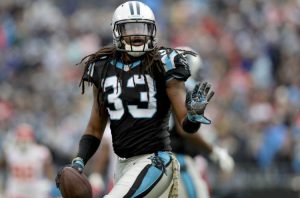