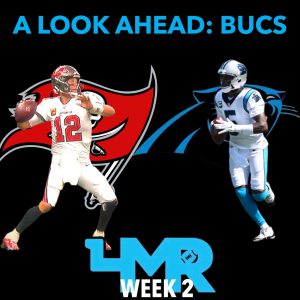 Well, that’s not the way fans wanted to start the Matt Rhule Era. There were some things to like about the team (mainly on offense), but there were also some things to work on. The Carolina defense looked lost at times, but you’ll have that when there is so much inexperience. Tampa, who also went through some changes in the offseason, started off with a loss too. It was an odd week one to say the least, as most stadiums didn’t have fans in the stands to help swing momentum. Here’s a look ahead to the Bucs:

The Bucs’ offense looks a little different this year. They signed Tom Brady and Leonard Fournette and traded for Rob Gronkowski. Tampa didn’t get off to the best start, but neither did Carolina. The Bucs drafted one of the best offensive tackles in the 2020 draft, and one of the best safeties as well.

There has been more turnover on this team than any other team in the league. From coaches, to scouts, to players….This is an entirely different team. Carolina used all of their 2020 draft picks on defensive players, which is where most of their issues lied.

Teddy Bridgewater played well for the Panthers, as he amassed 270 yards and a touchdown, with a quarterback rating of 98.9. Bridgewater will have his hands full on Sunday against the Tampa front seven, who was able to rush Drew Brees some on Sunday. Teddy does a good job of eluding pressure and stepping into the pocket. If he continues that, he should be able to take advantage of the Bucs and their lackluster secondary. Let’s hope the offensive line can hold off the Tampa pass rush.

Christian McCaffrey started the game off slow on Sunday, but managed to get 134 total yards and 2 touchdowns against the Raiders. There’s no doubt that McCaffrey is still the best running back in the league. Last year, Tampa’s defense held McCaffrey to 110 total yards and 2 touchdowns in two games. That’s amazing when you consider he had a record breaking season. With Tampa’s front seven in-tact, the Bucs could give CMC some fits. Look for Joe Brady to get McCaffrey involved heavily in the passing game. McCaffrey should see some screens, intermediate sideline routes and possibly a deep throw or two so that he can take advantage of Tampa’s secondary.

The Panthers have one of the fastest wide receiver trios in the league and that was put on display Sunday. Robby Anderson has a 75 yard touchdown from Bridgewater in the fourth quarter to take the lead and then capped it off with a successful two-point conversion. Fans shouldn’t worry about the offense, as they will likely get even better as the season progresses. People don’t realize how much the preseason reps are needed for an offense to sync. Especially in a year where a team has a new coaching staff, new quarterback and three new offensive linemen. Moore, Samuel and Anderson should get ample opportunities to gain separation and get a lot of yards. They must capitalize on a weak Tampa Secondary. Also, look for Carolina to get Ian Thomas involved more, as Tampa had issues shutting down Jared Cook last Sunday.

Looks like the Carolina defense picked up where they left off from last year…..and that’s not a good thing. Josh Jacobs ran for 93 yards and 3 touchdowns against the Panthers, while Derek Carr added 239 yards and a touchdown through the air. Carolina also had no sacks or hurries on Carr, which is unheard of for a Panthers’ defense. To be fair, this is basically a new defense with a few rookies. Even though the stats aren’t there, Derrick Brown had a good game. Jeremy Chinn flew around the field and had 7 solo tackles in his NFL debut. Troy Pride Jr. played pretty well Sunday, too. He had good coverage skills but he needs to turn his head and look for the ball better. He was in perfect position to intercept that touchdown pass had he just turned his head. Pride definitely outplayed his draft position.

Not all is bad about the defense, though. Jacobs didn’t break off any big runs and he only averaged 3.7 yards per carry. Teams last year averaged 5.7 yards per carry against Carolina. There was a lot to like about this young defense, but also a lot to work on. Kawann Short struggled against times, but he’s coming off a two game season and shoulder surgery with no preseason to get conditioned. He will get back to his form. Look for Phil Snow to incorporate a few defensive wrinkles to create pressure on Brady.

Tom Brady struggled throughout the first half against the Saints, but started to get into a rhythm as the game wore on. Brady has some weapons to work with, but his offensive line looks a little shaky.

Tampa has two very good running backs in Leonard Fournette and Ronald Jones. Jones will get the start, but Fournette will likely get a few carries this week now that he’s getting acclimated to the offense. They should have some success against the Panthers’ defense.

The Bucs have a really good receiving group in Godwin, Evans and Scotty Miller. They also have 3 solid tight ends in Gronkowski, Howard and Brate. Look for Brady to try and expose rookie Troy Pride Jr. and also veteran Tahir Whitehead, who struggled in coverage.

The Tampa defense has a strong and fast front seven who can stop the run and rush the passer. Their secondary struggled last week at times and will need to get to Bridgewater if they want to have a chance.

• Get McCaffrey involved heavily in the pass game. Try and establish the run game with CMC and Mike Davis. Tampa only allowed 82 yards rushing last week, but Carolina still needs to let McCaffrey run. He’s a volume runner. Eventually he will break one or two runs off.

• Protect Teddy. Bridgewater does well under pressure and steps into the pocket, but the offensive line needs to do their best to keep Teddy clean so he can expose the Tampa secondary.

• Maintain gap discipline on defense. Also, set the edge. Can’t let Tampa break off runs on the outside or through holes.

• Utilize the receivers’ speed. Carolina has three wide outs that can take the top off the defense and gain separation. Go after the Tampa secondary.

• Win the time of possession battle. The offense needs to sustain long scoring drives to keep the defense fresh and take the pressure off of them.

• Get pressure and hurry Brady. It should be easier this week against the Tampa offensive line.

• Pride Jr. and Douglas VS Evans and Godwin

You can never discount Tom Brady, even at 43 years old. Once he gets into rhythm, he’s hard to beat. However, there’s a possibility he may be without his top receiver, as Chris Godwin is in concussion protocol and will need to clear it if he wants to play. Carolina will come out with a solid game plan and pull out a 35-29 victory in Tampa. McCaffrey will get 160 total yards and 2 touchdowns. DJ Moore will have 110 yards and a touchdown. Robby Anderson will also have a touchdown. Carolina’s defense will get their first sack of the year and end the game with 4 sacks. Troy Pride Jr. will get his first career interception.