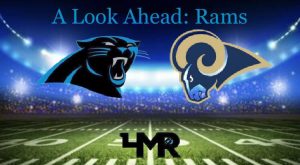 It’s finally here. The day that fans have been looking forward to since January. Week one of NFL action is upon us, and the Panthers have the NFC Champions coming to town. Carolina would love to start off fast this year, and they’re going to have quite the test this week. Here is a look ahead to this week one matchup:

The Rams didn’t have much roster turnaround this offseason, so they’ll likely be a powerhouse again in 2019. Wide receiver, Cooper Kupp, was injured the majority of 2018, so his return gives LA another weapon. The Rams defense wasn’t as dominant last season as they had hoped, and the losses of Suh and Joyner may have a larger impact than they think.

The Panthers have definitely upgraded the roster, at least on paper, and they hope to start fast. Last season they started 6-2 before Cam’s injury and they’d love to be in that position again this season, minus the injury to Newton. This year’s defense looks to have more of a pass rush and a more complete secondary, and the offense looks more explosive. Most importantly, Carolina is better in the trenches, which is where games are won or lost.

Prior to his injury, Cam Newton was having a better statistical season than his MVP year in 2015. There’s no reason to think he can’t pick up where he left off, and a porous Rams’ defense is a great place to start. Christian McCaffrey running the ball makes this offense explosive, and Carolina also utilizes him a lot in the passing game.

Goff, who was just signed to a four year extension worth $134 million, has the weapons to be successful. Goff passed for 4,688 yards, 32 touchdowns and 12 interceptions last year, and he seems to be getting better by the year. Todd Gurley is one of the best running backs in the league, as he is utilized in the running and passing game.

Cam had the second best completion percentage when using playaction passes. Carolina needs to utilize this not only in this game, but all season. The Rams’ defense was 14th against the pass last season, and it appears as if they’ve regressed since 2018. Not to mention, Carolina’s offensive line has improved substantially since last year.

Christian McCaffrey needs to carry the ball early and often. It wouldn’t hurt to include Scarlett and Bonnafon in the game plan either. The Rams’ defense was 23rd against the run in 2018, and it looks like they could have gotten worse with the loss of Suh. McCaffrey will need to be heavily utilized in the passing game too.

Carolina has a lot of speed at receiver, and also a lot of guys that can get a lot of yards after catch. The Rams do have a good secondary, so Carolina’s receivers need to create space. Aquib Talib has lost a step, so Cam needs to take advantage of him and also aging safety, Eric Weddle.

Carolina’s defense didn’t perform up to their standards last year, until Coach Rivera began calling plays. They have upgraded their pass rush significantly this offseason, and also have a better secondary than they did. The Rams use a lot of play action passing, so Rivera needs to game plan for that. Bradberry and Jackson will have their work cut out for them, as will Boston and Reid. Don’t get beat deep! Hopefully, McCoy, Short and company will get to Goff before he throws it deep.

Jared Goff utilizes the playaction pass more than most quarterbacks, so if LA wants to win this game, they’re going to need that. Having Todd Gurley involved in both facets of the game will help Goff. Carolina’s defense was ranked 18th against the pass in 2018, but they’ve gotten better since.

Todd Gurley is one of the best running backs in the league. If the Rams want to win, they’ll have to find ways to get him the ball. Carolina was decent at stopping the run in 2018, and looks to have only gotten better. However, you can’t stop Gurley. You can only limit him, and even that’s tough.

The Rams’ receivers are talented, and they’re led by Brandon Cooks, Robert Woods and Cooper Kupp. Carolina will have the tough test of knowing where all three (plus Gurley) are on the field. Carolina better hope their pass rush shows up.

The Rams’ defense wasn’t exactly dominating last season, and they seem to have regressed a little bit. The loss of Suh and Joyner hurts, but they still have Aaron Donald wreaking havoc. They also have a good secondary. If the Rams want to win, they’ll have to stop McCaffrey from pounding the ball up the middle.

Keys to a Carolina Win

Bradberry and Jackson VS Cooks and Woods. 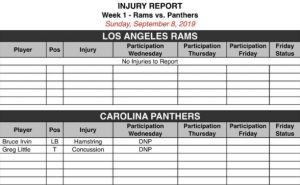 The Rams are fully healthy coming into the season. The Panthers, however, have Bruce Irvin and Greg Little on the injury report. It appears as if Little will be out, but Irvin has a small chance to play. If Irvin is out on Sunday, Carolina rookie, Brian Burns, will get more playing time. Carolina’s 2018 fourth round pick, Marquis Haynes, will also get an extended workload.

It’s going to be a tough matchup for both teams and a true test for Carolina. Christian McCaffrey will get going early and that’ll set Carolina up for success. Both teams will have success offensively, but ultimately Carolina will take this game at home 30-27

Fun Side Note: Since 2008, Carolina has played the reigning NFC Champs every year. They’ve won three of the last four matchups.