Takeaways All or Nothing 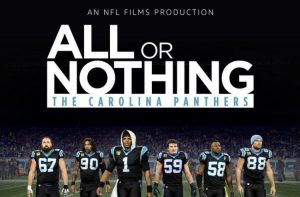 By now, everyone has at least heard different talking points about “All or Nothing” and discussed it among friends. If you haven’t watched it, you need to. Yes, there’s gratuitous use of curse words, but that is life in competitive sports. It’s an amazing show that gives fans an in-depth look at the 2018 Panthers.

There are several things I learned while watching the series. Some things I already knew, and some I didn’t. The show is fun, intriguing, surprising, insightful and will have you hyped up and ready fo the season to start. From start to finish, it’s a must-see. Things I learned:

Cam is a Leader

It’s baffling that people still question Cam’s leadership. Cam constantly motivates his teammates to do better, no matter the situation. He leads by the way he plays. He seemingly puts the team on his back when they need him. The way he gets excited when other players make great plays is awesome. The way he plays through pain and doesn’t ever say anything is the sign of a leader. The way he accepted the coaches sitting him for the remainder of the season and getting excited for Heinicke was good to see. It was refreshing to actually see Cam in this light. Hopefully it’ll show fans of other teams, what Panther Nation already knew. Cam is a leader…..and it was well documented in this series.

Cam does so much for the community, but “All or Nothing” showed Cam walking through the streets of Charlotte handing out food to the homeless on Thanksgiving. He’s done that more times than have been reported, but having it on this series will show fans of other teams how Cam makes a difference within the community.

Ron Rivera is One Hell of a Coach

That speech during the Pittsburgh game had fans ready to go hit someone. Rivera is a player’s coach. He’s well respected within the locker room. He knows how to motivate his players. He knows his stuff. Side note: It was fun to see how Rivera called each player “kiddo” and showed how he thinks of these guys as his own. He truly cares about the players, as well as, the game. Seeing how Rivera never lost the locker room during the losing streak, is a testament on how good of a coach he really is. The Panthers are lucky to have him.

Yes, Funchess was going through a lot with the death of his cousin and yes, everyone grieves differently. However, you never let it break you to the point that you get into an altercation with coaches. He’s a professional. He’s not supposed to let things hinder his playing ability. He showed that he still has some growing up to do. This might not be fair assessment, but it’s how he looked on the small screen. He had a lot of drops in key situations. Panthers thought it was best to let him walk to get a fresh start elsewhere.

Seeing David Tepper excited about the team and walking around shaking the hands of fans, was good to see. Seeing how passionate he is about the Panthers and how competitive he is, should make people pumped about the future of this franchise. Tepper is a fan of football. He yells and cheers for the Panthers like he’s been a fan of the team for 25 years. He knows the business side of the NFL. He realized the issues that faced the team from a business standpoint, and made necessary changes. He had a practice bubble built when he noticed that the Panthers had an unfair disadvantage in regards to practicing outdoors. He voiced his opinion about the team direction and mentioned that the success of the team is hinged on both the offensive and defensive lines. Having Tepper as an owner is an advantage to the Carolina Panthers.

Donte Jackson Has the Tools to Be Great

After watching the series, Jackson tweeted that the show didn’t portray him correctly, and that he wasn’t the only one that was tired of losing. The series didn’t exactly do Jackson wrong, but it showed how tough it is for rookies in the NFL. Jackson has the mental toughness, attitude and skill set to be really good, if not great, in this league. He made a few mistakes last season, but they were rookie mistakes. He was really good in most cases. The guy is going to be special. His pick-two against the Saints last year was one of my favorite plays of the year.

This was one of my favorite parts of the series. Born in Nigeria, Efe and his sister moved to the Netherlands and then were both trafficked to London at the age of 10. Once in London, Efe and his sister were left homeless. He slept on the streets and then went through 10 different foster homes. He eventually found American football in London and worked hard. Efe has said publicly that he used to hang around the wrong crowd, but once he found football, he straightened up. Great story about working hard and getting where you want to be. Bettering yourself through hard work is a story we can all relate to.

There could’ve been a number of takeaways from this series, but these were some of the bigger ones. No matter what you learned, one thing is for certain. This was an amazing look into the team, as you’ve never seen before. It’s just a shame that it was only eight episodes and an even bigger shame that the season didn’t end on a better note. No matter what, we will keep pounding! #4MR #WhatARush