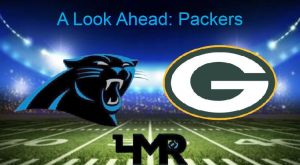 I predicted a 30-17 win for Carolina, but I was off by 3. I’ll try to be better this time. Carolina got back to their winning ways against Tennessee, and CMC continues his historic pace. There are still things that need to be improved, but overall this was a good team win. Carolina won’t have much time to celebrate, as they have to get ready for Green Bay. Here is a look ahead to the Packers:

The Packers got some quality players in free agency and had a good draft, so this will be a tough opponent. Green Bay sits atop of the NFC North with a record of 7-2 and they just took a beating from the Chargers last Sunday, so they will be gunning for the Panthers.

It looked as though Kyle Allen was going to let the 49er game affect him, as he was struggling in the first half. Then he settled down and started making good throws. Dennis Daley is becoming an absolute stud at left tackle, which is great considering Greg Little is still in the concussion protocol. Christian McCaffrey and the Carolina defense continue their dominance.

Kyle Allen started off a bit shaky, but he brushed it off and played well. He made some good throws on Sunday and looked more comfortable in the pocket. Green Bay’s defense isn’t nearly as good as Tennessee’s, but it’ll still be a test to keep pace with Aaron Rodgers. The offensive line improved from the 49er game, as Trai Turner and Dennis Daley were healthier this week. Daley has been an absolute steal in the draft and it seems like Carolina finally has depth on the offensive line. The game plan will likely be run heavy, but Allen will have to make some key throws on third down, which he should be able to do as long as he gets protection. Green Bay’s pass rush can be problematic. However, the Packers have trouble in man coverage, so Carolina will look to exploit it.

Christian McCaffrey continued to carry the offense on his back, as he had 166 total yards and 3 touchdowns. It will be run heavy again, as the Green Bay run defense has struggled almost as bad as Carolina’s. The Chargers ran for 159 yards on the Packers last week, so McCaffrey should have another big day. Carolina needs to play ahead, so McCaffrey and company would like to strike early. The best running back in the game should dominate this Green Bay defense that ranks 24th in the league against the run. The Packers are also at the bottom of the league in plays of 40 or more yards allowed, and Carolina leads the league in plays of 50 or more yards gained. So, this is a nice matchup for the Panthers. Don’t worry about CMC in the cold. He’s from Colorado and he’s played a lot of cold weather games. His dad, Ed McCaffrey wouldn’t let him wear sleeves in those games.

The Carolina receivers used Steve Smith’s criticism as motivation and absolutely dominated Sunday. Both Moore and Samuel ran good routes and made jaw dropping catches and runs after catch. Look for the receivers to build on their performance from last Sunday against a Green Bay defense that ranks 21st against the pass. Although, it remains to be seen how much passing will actually go on in the weather conditions of Green Bay. Look for Allen to use Olsen more, as the Packers have had problems covering tight ends the last 3 weeks (TE’s combined for 18 catches, 273 yards and 3 touchdowns).

Carolina added Donte Moncrief to the wide receiver room this week, and while he has had some issues this year with drops, the hope is that reuniting him with former receiver’s coach Jim Hostler will help. Hostler was Moncrief’s coach in Indianapolis when Moncrief had his best year as a pro, as he had 64 catches for 733 yards and 6 touchdowns in 2015. Let’s remember that Ted Ginn Jr. came to Carolina after having 2 catches for 1 yard the previous year for the 49ers and he came in and had three of his best years in the league for the Panthers in a four year period.

The Carolina defense is going to have their hands full with Aaron Jones and Aaron Rodgers. The game will likely be a heavy dose of running and defensive pressure. The Panthers defense is still pretty bad at stopping the run, as they are 26th in the league. On Wednesday, Carolina added Wes Horton, who should help immediately in stopping the run. Brian Burns played the most snaps of any defensive end/linebacker due to Mario Addison not playing, but he was still favoring his injured wrist at times. Addison will play this week, so that will elevate the defensive effort against Green Bay. In order to have a shot against the Packers, Carolina needs to pressure Rodgers early and often. Carolina also needs to contain Aaron Jones, which will be a task. Hopefully, James Bradberry will be good to go on Sunday because they’re going to need him to cover Devante Adams. Look for a lot of disguised blitzes and coverages to try and confuse Rodgers. One thing is for sure, the Packers will be throwing everything they have at Carolina this Sunday, especially after getting beat down by the Chargers last week.

Aaron Rodgers had an uncharacteristically bad game last Sunday against the Chargers, as he only threw for 161 yards and 1 touchdown. He’d like to have a bounce back game this week against the Panthers, but it could be a tough test. Rodgers got Devante Adams back last week, so he will be giving the Panthers his best. His offensive tackles are two of the best in the league, although they struggled last week. They’ll look to bounce back on Sunday.

Aaron Jones might be 16th in rushing yards, but he can be a real problem for defenses. He’s a shifty, young running back who can run between the tackles. Jones is also used a lot in the passing game, which could give the Panthers problems. Carolina’s run defense is near the bottom of the league, so Jones could have a really big day. The Packers also have another dynamic running back in Jamaal Williams, who will likely split carries with Jones to give him a break. If Carolina wants to win this game, they’re going to need to stop these two backs. Look for Green Bay to use a lot of misdirection plays, as this seems to be the way to confuse the Panthers.

The Packers got Devante Adams back last week, but he wasn’t at 100%. Adams will be ready to go after last week’s embarrassment. Green Bay has some nice role players behind Adams, but this is probably Rodgers’ worst receiving corps of his career. Marquez Valdes-Scantling has a lot of potential, but he is only averaging 2.4 catches per game. If the Packers get the opportunity, look for them to try and beat the Panthers deep. There have been a dozen plays this year where a receiver has gotten behind the Panther secondary, but the throw was off target. Rodgers is rarely off target on those balls, so they will take some shots.

Green Bay’s defense isn’t as good as San Francisco or Tennessee, as they are 26th in the league. However, their pass rush shouldn’t be overlooked. Za’darius Smith and Preston Smith both have over 8 sacks each, so Allen will be pressured on Sunday. The Packers are top five in getting pressure on the quarterback without blitzing. The Packers run a lot of dime and nickel formations, but they have trouble stopping the run, so McCaffrey should do well against them.

• Pressure Rodgers, but don’t let him out of the pocket.

• Contain the Smiths. While they have a combined 16.5 sacks, the rest of the team only has 5.5 combined. So if Carolina can somehow contain those two players, Allen should have some time in the pocket.

Both teams come into Sunday relatively healthy. Hopefully James Bradberry can play, as he is needed to try and contain Devante Adams.

If Carolina wants to make a playoff run, this is a game they need to win. The back half of the schedule is going to be tough, with Seattle, Green Bay, Indianapolis and the Saints (twice) ahead. All things considered, the Panthers will likely need at least 11 wins to make the playoffs, so this is an important game. It’s also a game that they can win. It will be a hard fought battle, but Carolina will come away victorious, with a score of 28-24. Christian McCaffrey will have 195 total yards and 2 total touchdowns. Greg Olsen will contribute 75 yards and a touchdown as well. The Panthers’ defense will sack Aaron Rodgers, behind a struggling offensive line, 6 times. #KeepPounding