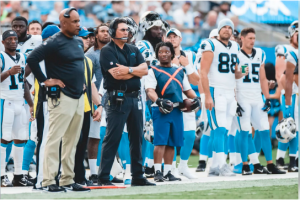 A Glance at the Roster

Because of the front office and staff connections with the Panthers, fans will notice some familiar faces when we kick off on Friday night. The Bills have signed several former Panthers, but some players currently with Bills are Star Lotulelei, Kurt Coleman, Dean Marlowe and Captain Munnerlyn. It should also be noted that the Bills scout similarly to the Panthers. They have drafted several players that the Panthers either met with or showed heavy interest in. Some players that The 4 Man Rush had on its most recent draft board were former Oklahoma Offensive Tackle Cody Ford,  former Houston Defensive Tackle Ed Oliver and former Buffalo University Quarterback Tyree Jackson.

In only his second season, Bills quarterback Josh Allen already has a reputation for having one of the biggest arms in all of football. With his top targets Zay Jones, Andre Roberts, and Cole Beasley having sub 4.4 40 speed, we should expect Allen to take some shots downfield. Curtis Samuel has made a lot of explosive plays in camp thus far, so it will be interesting see how capable the Panthers secondary is at keeping plays in front of them. The Panthers offensive line had a very underwhelming performance last week. Buffalo presents a very formidable front seven with a rare combination of size and speed at both levels. Star Lotulelei, Shaq Lawson, Jerry Hughes, and Oliver head the defensive line. The linebacker unit is headed by Tremaine Edmunds, former first round pick, who has elite speed and football instincts. This is a good test to see if the offensive line can open some running lanes and neutralize a pretty good pass rush. 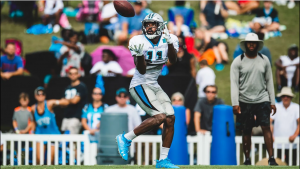 #1. Today was the final practice of training camp at Wofford College for the 2019 season. There was plenty of speculation among Carolina Panthers fans about if this was the very last time the city of Spartanburg SC will be the summer home for the team. The current contract expired today and there has not been any statement by Carolina Panthers owner Mr. David Tepper or by anyone in the Wofford administration.

#2. Players who did not practice today: C Matt Paradis (vet day), LB Shaq Thompson (vet day), DT Gerald McCoy (vet day), TE Ian Thomas (rib contusion), CB Kevon Seymour (hamstring), C Tyler Larsen (unknown) and K Graham Gano (sore leg).  LB/DE Brian Burns came out in full pads but after warming up he was told by the medical staff to take the day off and to do work on the sidelines. He has a slight ankle bruise but expects to play in the game Friday night.

#4. Positive plays made by the Carolina Panthers offense: QB Cam Newton was able to make Bills rookie DT Ed Oliver jump offsides three times in a row. He was then pulled from the field and got a good cussing out from his position coach. RB Christian McCaffrey runs right up the middle of the defense untouched for about 30 yards. On the very next play Newton threw a deep TD pass to WR Curtis Samuel who was covered by Bills CB Tre’Davious White. TE Greg Olsen makes a spectacular one hand catch behind his back from a Newton pass. TE Chris Manhertz makes back to back catches over good coverage by Bills LB Shaq Lawson. QB Kyle Allen connected on a deep ball with WR Torrey Smith for about 40 yards. RB Reggie Bonnafon runs in for a TD on the last play of the day.

#5. Negative plays made by the Carolina Panthers offense: QB Kyle Allen was the second team QB and one of his passes was intercepted by Bills LB Deon Lacey after the ball bounced off the hands of WR Terry Godwin. The offense got a delay of game penalty that caused head coach Ron Rivera to start cussing very loudly. LT Greg Little gave up a quick pressure to Bills LB Jerry Hughes. Newton was picked of by Bills CB Ryan Lewis. Panthers QBs Newton, Allen and Will Grier had about two-thirds of their pass deflected during team drills.

#8. Positive play made by the Carolina Panthers special teams: During the gunner drills CB Javien Elliott did a juke and swim move to split the two Buffalo Bills blockers and got a free release down the field. This caused a huge uproar from the Panthers sidelines as special team coaches Chase Blackburn and Ben Jacobs raced down to congratulate him along with several teammates.

#9. Negative play made by the Carolina Panthers special teams: During field goal drills K Joey Slye went 5 for 8 on making successful kicks. Those three misses looked bad too. Prior to Elliott’s successful attempt at gunner all of the other Panthers players were stifled by Bills blockers which got their sideline hyped for most of the period.

#10. Panthers G Norman Price was down on the ground for a few moments then helped up by teammates. He was then carted off by trainers. LB/DE Bruce Irvin and Bills rookie OT Cody Ford had to be separated after Irvin took exception to a really low chop block by Ford. WR Chris Hogan also got into a shouting match with Bills DT LT Walton but both players were quickly separated. DL Bryan Cox Jr. was pulled over on I-85 North near Kings Mountain NC which is about 30 miles west of Charlotte NC. State troopers gave him a ticket for speeding from doing 90 m.p.h in a 65 m.p.h zone, possession of marijuana and possession of paraphernalia. The preseason game between these two teams starts at 7:00 PM EST at Bank of America Stadium in Charlotte NC.