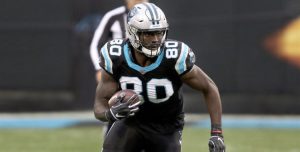 There have been 11 days of training camp in Spartanburg, and there’s plenty of storylines. There’s also plenty to be hopeful for. Cam’s shoulder is looking good, rookie Brian Burns has flashed a ton of ability and there seems to be a lot of guys stepping up and making plays on both sides of the ball. Everyone that covers the Panthers has mentioned wideout, Curtis Samuel, as a breakout star in camp, and rightfully so. The guy has had his first healthy offseason and has taken his play to another level. Things are looking up for Samuel, as he seems to be making a case to be Carolina’s number one receiver. However, there’s another pass catcher that has quietly had a really good training camp so far.

Ian Thomas has had a phenomenal two weeks of camp. Judging by the plays he’s made, Thomas could be an integral part in the Panthers’ offense and have a breakout season. He’s been catching virtually everything thrown his way, no matter who throws it. During 11 on 11 drills, he has dominated the red zone. It looks as though he has improved his route running, which has helped him gain more separation. This will bode well for Carolina, and Cam Newton. It also appears as if he’s improved on his blocking, which is good for Carolina’s offense.

Thomas, a 2018 4th round pick, showed flashes last season in Greg Olsen’s absence. He had 36 catches for 333 yards and 2 touchdowns. That’s not great stats, but he was a rookie. The fact that Cam wasn’t healthy during the second half of the season, should also be taken into account. Ian has loads of potential and has worked extremely hard this spring. He has been praised for his hard work ethic and even worked extra with Cam, and other offensive weapons, in San Diego this offseason. So, he should have a really good rapport with Newton. 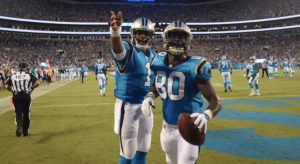 Also working in Thomas’ favor, is having Norv Turner as an offensive coordinator. Norv has used a lot of two right end sets, (Mainly in San Diego with Gates and McMichael or Manumaleuna) but he hasn’t had a dynamic TE2 like Thomas. Even so, Norv has a knack for getting his dynamic playmakers the ball, and Thomas should thrive in year two of Turner’s offense.

Even if Greg Olsen gets hurt again, Cam has enough weapons to take the pressure off of Thomas. Carolina has so many dynamic playmakers on this offense, that it’s scary. Ian Thomas is no different. He’s a guy that fans should feel really good about going into this season. Panther Nation should get a good look at Thomas in the preseason, and see how well he dominates the red zone.