The progression of Cam Newton’s career has been strikingly similar to legendary Hall of Fame quarterback John Elway. From a 50 foot view, both Newton and Elway entered the league as rocket armed dual threat quarterbacks with unlimited upside potential. But early in their careers, they experienced a roller coaster ride of peaks and valleys and were unable to capture that elusive Super Bowl title. 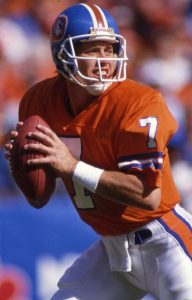 Early in his career, John Elway’s passing statistics were pedestrian as he ranked towards the middle of the pack in completion percentage and quarterback rating in comparison to his peers. John Elway’s ranking during his first 10 seasons appears below:

During his first 10 seasons, Elway’s completion percentage only ranked in the top 10 one time. His quarterback rating consistently ranked in the middle of the pack. But when it came down to crunch time, Elway would find ways to will his team to victory with his strong arm and his running ability. During this same time frame, Elway recorded 21 4th quarter comebacks and 25 game winning drives. In 1987, John Elway won the league’s most valuable player (MVP) award and led the Broncos to the Super Bowl. However, his spectacular run had an ugly ending as the Denver Broncos would go on to get blown out in the Super Bowl by score of 42-10 to the Washington Redskins. In fact, Elway would go on to lose his first 3 Super Bowls including a 55-10 loss to the San Francisco 49ers and a 39-20 to the New York Giants.

After his MVP season, Elway followed up with one of the worst seasons of his career, throwing 17 touchdowns and 19 interceptions. He would get back to the Super Bowl in 1989 but struggled going 10-26 in a 55-10 loss to the 49ers. People started to doubt whether Elway would ever win a Super Bowl during his career.

In 1993, his 11th season, Elway was frustrated and felt that his talents weren’t being fully utilized. They had a successful run under Dan Reeves but Elway wanted to open up the offense more. He grew tired of constantly being in close games and having to put the team on his back in the final minutes. The Broncos changed coaches and hired Wade Phillips as head coach and Jim Fassel as the offensive coordinator, the latter, who recruited Elway to Stanford University.  In 1993, Elway had his best season passing statically with over 4,000 yards, and a 63 percent completion percentage. This was the first time in his career that he threw over 60 percent and it was an 8 percent improvement over the previous season. Elway would go on to make the Associated Press’ 2nd team all pro team.

The Wade Philips era didn’t last long in Denver and in 1995, Mike Shanahan took over as the team’s new head coach. Also during this year, the Broncos added several key pieces to their roster and saw the emergence of key superstars. Shannon Sharpe was emerging as an elite tight end, they drafted Terrell Davis who would go on to make the Hall of Fame and drafted Rod Smith who would become a productive wide receiver for the team. All of the sudden, the Broncos had some supporting talent to surround Elway with and this took a lot of pressure off of him.

In 1996, Davis had a breakout season, and the Broncos finished the season as the 1st seed in the AFC playoffs. But they were upset by the Jacksonville Jaguars and once again, the critics came after Elway due to his inability to win the big games.

In 1997, Denver finally got it right. Davis ran for 1,700 yards, Elway threw a career high in touchdown passes and Denver would go on to upset Brett Favre and the Green Bay Packers in the Super Bowl. Elway could finally add Super Bowl champion to his Hall of Fame resume. In 1998, the Broncos came back even stronger and Davis ran for 2,000 yards, Elway has another solid season and they dominated the Atlanta Falcons, winning back to back championships. Elway won MVP of the Super Bowl and retired on top of the game..

In his last few seasons, Elway’s passing statistics were noticeably better than in his earlier years. System changes, supporting talent and his maturity as an NFL quarterback allowed him to continue to evolve and eventually end his career with two Super Bowl rings. 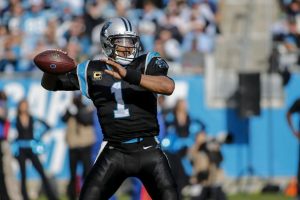 This now brings us to Cam Newton. Like Elway, Newton was a dynamic playmaker at the quarterback position early in his career, despite putting up pedestrian passing statistics. However, his dynamic playmaking ability was what set him apart from his peers. Newton would also go on to win league MVP early in his career and lead his team to the Super Bowl, only to come up short. Following the Super Bowl loss, Newton would go on to have the worst season of his career in 2016 and only made the playoffs in one out of the following three seasons.

However, over the past couple of seasons, the Panthers made several key additions that could potentially help Cam Newton lead his team back to the promise land. The team added dynamic weapons including 2nd team all pro Christian McCaffrey and wide receivers Curtis Samuel and DJ Moore. In addition, the hiring of Norv Turner helped Newton post one of the best seasons of his career statistically as a passer as he posted a career high completion percentage of 67.9 percent  and was on pace to have a career high quarterback rating before his shoulder gave out late in the season.

Entering his ninth season, Newton will be surrounded with the most dynamic group of skill position players since he’s entered the league. With his second year in Norv Turner’s system, the pieces are in place for him to make another run at the Super Bowl title that has eluded him throughout his career.

The ups and downs of the career paths of Newton and Elway are strikingly similar. The question now becomes, can Newton overcome these adversities and finish his career with a championship, the same way Elway was able to?