The last practice before heading up to Indianapolis was brief for the Panthers. With joint practices ahead on Thursday and Friday with the Colts, the players only wore helmets, jerseys, and shorts on this 80° morning in Spartanburg. LB Denzel Perryman, CB A.J. Bouye, WR Keith Kirkwood were in red jerseys riding bicycles as they missed practice. OL Dennis Daley was excused from his 2nd practice in a row to deal with a family-related issue. C Matt Paradis was back but in a green jersey. LT Cam Erving was also limited in practice as he recovers from a shoulder injury.

With practice only being 90 minutes long, the team periods focused solely on two-minute offense and time management situations. Here are the highlighted plays:

S Jeremy Chinn got an early INT on a pass from QB Sam Darnold, intended for TE Dan Arnold.

QB Will Grier threw a pass right into the hands of RB Spencer Brown, who bobbled it. Chinn was right there and almost had his 2nd pick of the day.

Grier threw two consecutive passes to WR Brandon Zylstra. The first was a 45-yard bomb downfield. The 2nd was about 20 yards as he dragged both feet for the completion.

Overall it was good to see Coach Rhule put heavy emphasis on different types of critical game-time situations. Without pads on the offensive line struggled to block the defensive front seven. Had it been real-time, there would have been six to eight sacks easily. It’s going to be interesting to see how the joint practices will go with the Indianapolis Colts this coming Thursday and Friday.

With another pushed-back start time of 10:00 am, the Carolina Panthers felt the return of warmer temperatures in the low 80s. They continue to build upon the recent momentum lately as they perfect their own craft in the team schemes. This practice saw the return of WR Robby Anderson, who missed the last two practices with personal family matters back in Florida.

LT Cam Erving, LB Clay Johnston, and DT Caraun Reid joined CB A.J. Bouye and LB Denzel Perryman in the red jerseys for players who are not practicing. C Matt Paradis and OL Dennis Daley are not here due to approved absence for personal reasons.

LB Jermaine Carter Jr. got an INT on the 1st play, a pass by QB Sam Darnold that CB Jaycee Horn tipped.

Darnold comes right back the very next play and throws a TD pass to TE Dan Arnold.

S Sean Chandler continues to be the best safety not named Jeremy Chinn in camp so far. He has just added his 6th pass deflection to go along with two forced fumbles.

Darnold scrambled out of the pocket to hit WR D.J. Moore on a deep 30+ yard pass on the 1st play.

WR Robby Anderson made a great one-handed TD grab from a pass from Darnold.

WR C.J. Saunders caught the final play for a TD from Darnold.

WR David Moore was carted off the field during the 1st session of 11 on 11 drills but returned to practice shortly afterward.  The practice was only an hour and a half today, as it ended at 11:30 am. However, the energy and focus were good today as it seems the players get more comfortable with each other each day.

The Carolina Panthers returned to training camp in sunny Spartanburg SC this Sunday after having Saturday off following a rainy Fan Fest Friday night in Charlotte NC. The scheduled start time of 8:30am was pushed back to 9:30am. WR Robby Anderson was still excused from practice again to attend to a personal family issue. LB Denzel Perryman, CB A.J. Bouye, DB Myles Hartsfield, S Kenny Robinson, WR Keith Kirkwood and WR Krishawn Hogan all had on red jerseys which means they sat out practice. RG John Miller got a veteran day off.

DT Brayvion Roy split a double team to get a tackle for loss on RB Rodney Smith on a 4th down play.

S Sean Chandler had a run stuff on the one yard line on RB Reggie Bonnafon.

RB Christian McCaffrey scored two TD runs. The first was off an inside zone run. The second was an off tackle run.

RB Reggie Bonnafon scored a TD run on a toss sweep play in which he made two defenders miss him before getting in the end zone.

C Matt Paradis left practice early with some back tightness. Coach Rhule said it was pre-cautionary and nothing serious. Paradis was already given permission to be excused for tomorrow’s Monday practice for personal reasons. LG Pat Elflein slide over to C to replace Paradis while LT Matt Kaskey slide over to LG to cover for Elflein. LB Shaq Thompson was a full participant at practice today after being off for a week with a soft tissue injury. The entire coaching staff had to run 20 yard sprints after practice because K Joey Slye made the last FG attempt from 53 yards.  It is good to see both the offense and defense take turns executing consistently.

With another cooler than average morning with 75° coming down from partly cloudy Spartanburg skies the Carolina Panthers continued to build upon improving from the day before. CB A.J. Bouye, LB Shaq Thompson, LB Denzel Perryman and DT DaQuan Jones did not practice today. Owner David Tepper and GM Scott Fitterer were on the field watching practice.

#1. RB Christian McCaffrey runs behind the successful double team block of C Matt Paradis and RG John Miller on DT Derrick Brown to bounce outside and outrun the secondary to score a 50 yard TD.

#2. QB Sam Darnold scrambled to his left from the 32 yard line and threw a TD pass to TE Dan Arnold in the back of the end zone.

#3. CB Donte Jackson made a spectacular leaping pass deflection on a pass intended for WR D.J. Moore along the sideline.

#1. On 2nd down from the 20 yard line QB Sam Darnold throws a TD pass to TE Dan Arnold.

#2. On 3rd down from the 11 yard line QB Sam Darnold throws a TD pass to WR Robby Anderson.

#3. On another 3rd down from the six yard line QB Sam Darnold throws a TD pass to RB Chuba Hubbard.

#4. On 4th down from the seven yard line QB P.J. Walker throws a TD pass to WR David Moore.

With a temperature of around 72°, it was a rare cool morning in Spartanburg for the month of August. But the offensive players for the Carolina Panthers brought their own heat to the field. From 1st team drill to the last one, the offense dominated tempo today. A great sight was seeing WR Keith Kirkwood back at practice today. Unfortunately, he has been diagnosed with a concussion, so he was off on the sidelines. Also, CB A.J. Bouye, LB Shaq Thompson, and LB Denzel Perryman did not practice as indicated by all wearing the red jerseys.

The offense came out with a determined purpose from the start.  The 1st team offense lead by QB Sam Darnold scored three TDs via the pass. Darnold was 4-4 passing with a TD pass each to WR D.J. Moore, WR Robby Anderson and RB Christian McCaffrey. The 2nd team offense was lead by QB P.J. Walker score two TDs via the pass. Walker threw both TDs passes to WR Brandon Zylstra.

It was during this session that the defense finally starting making plays. CB Jaycee Horn knocked away the ball thrown by QB Sam Darnold, intended for WR D.J. Moore.  DE/LB Brian Burns and LB Hasson Reddick both had back-to-back “sacks.”  The drive ended with K Joey Slye converting a 47 yard FG attempt. The 2nd team offense tried to get within scoring range but was overwhelmed by the pressure up the middle from DT Brayvion Roy and DT Daivyon Nixon that forced incomplete passes from QB Will Grier. S Kenny Robinson made a great pass deflection on WR Omar Bayless to force 4th down.

RB Christian McCaffrey kept the offensive momentum going by scoring two TD runs during this period. His ability to run between the tackles is so amazing to watch. Once he reaches the 2nd level of the defense, he has yet to be stopped so far during camp. QB Sam Darnold threw another TD pass to WR D.J. Moore during this 2nd session. CB Jaycee Horn made a good pass deflection on TE Dan Arnold.  The first fight of training camp came when CB Troy Pride Jr. tackled WR Robby Anderson while out of bounds. Anderson then came up behind Pride Jr. and punched him in the back of the helmet. The altercation was quickly broken up, and Coach Matt Rhule made both players run laps.

The offensive line on both the 1st and 2nd teams stood out today, with solid performances by C Matt Paradis, RT Taylor Moton, LT Trent Scott, G Deonte Brown, and G John Miller. Also, RT Brady Christensen had a solid day as well. Overall, it was good to see a dominant effort by the guys in the trenches today.

After a steady rain overnight that carried over into early morning, the Carolina Panthers had dry weather for their 8:30 am practice.

CB A.J. Bouye and LB Shaq Thompson practiced but had red jerseys on. LB Denzel Perryman was riding a bicycle throughout practice but nothing of a severe nature at all. RB Darius Clark was injured and carted off the practice field towards the end of practice.

The biggest story of today’s practice was the vicious hit that S J.T. Ibe put on WR Keith Kirkwood during the 1st session of 11 on 11 in full pads. On that play, Kirkwood jumped up high to catch the ball. As he was coming down, Ibe hit him in the head/neck area. Medical staff quickly rushed over to attend to Kirkwood as he laid motionless on the field. After about 12 minutes, Kirkwood stabilized, and the training staff loaded him into a nearby ambulance which took him to Spartanburg Hospital. Rhule cussed Ibe out and threw him out of practice. About 45 minutes later, Ibe was released. The latest update on Kirkwood is that he can move all his lower extremities and has no pain in his neck area. 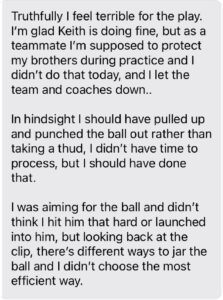 Coach Rhule asked a couple of the players if they wanted to continue practice or call it off. The players said they wanted to keep practicing. However, the energy just was not the same after the Kirkwood injury. To give an overall summary, I will say that the offensive line held their own a little bit better today with pads.

RB Christian McCaffrey continues to have about three or four spectacular runs each session. At times the offensive line gave QB Sam Darnold, P.J. Walker, and Will Grier plenty of good pass protection. It was good to see the offensive line finally win some in the trenches. But overall, the edge still went to the defensive front seven. Speed and good pursuit angles seem to be early consistent traits that this defense is showing.  Coach Rhule is still making players who have pre-snap penalties run laps. Today it was QB Sam Darnold and TE Tommy Tremble.

Overall, training camp is only 1/3 of the way completed. Patience to let the players make mistakes and learn from them would be the best stress-free advice for fans. The talent is there on both sides of the ball, but the process of gelling together takes time.