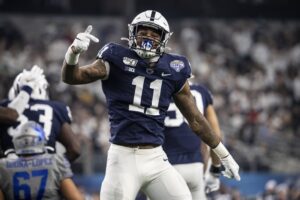 Summary: Hailing from Harrisburg, Pennsylvania, Parsons played defensive end and running back in high school. He was also a basketball star at his alma-mater. As a five-star recruit at defensive end and top five player in the country at the time (according to 247sports), Parsons was recruited by many big time programs including Alabama, Ohio State, Penn State and more. A violation of NCAA regulations prevented Ohio State from continuing to recruit him, opening the door even wider for Penn State to secure his commitment in 2017. Penn State head coach James Franklin decided Parsons’ skill set was best suited for the linebacker position. In his freshman season, Parsons started only one game at linebacker, but still led the team in tackles. He was named First-team Freshman All-American. His sophomore year in 2019 did not disappoint as he was named First-team All-Big Ten, a consensus All-American, the Butkus-Fitzgerald linebacker of the year, and Cotton Bowl Defensive MVP. His name was officially on everyone’s radar. This past season, he opted out of playing for Penn State due to COVID-19 concerns.

Weaknesses: Off the field concerns, will take time for him to improve coverage skills, undisciplined at times

Conclusion: Parsons was able to end his career at Penn State on a high note with an excellent 2019 season that led to Penn State winning the Cotton Bowl and Parsons himself being named Cotton Bowl Defensive MVP. He also was able to work on his skillset due to opting out of the 2020 season. He doesn’t have much experience in coverage, so it will take time for him to improve there, but his combination of size, speed, rare movement skills and intelligence is a good sign that he will. His movement skills from playing running back and defensive end (five-star DE recruit) in high school are the strength of his game. He’s able to shake blockers with his slippery movement skills to create pressure and negative plays. Excellent at working through “trash” to find the ball. He also beats teammates to the ball when he’s further away from the ball than his teammates. Rangy sideline to sideline guy. Teams will have to do extensive research on those damning off the field allegations.

Overall grade: 7 (Perennial Pro-Bowler eventually) I’m very high on Parsons, but like all prospects there are questions about him. Are his off the field concerns legit? Will he put the time in to improve in coverage? The talent is there. 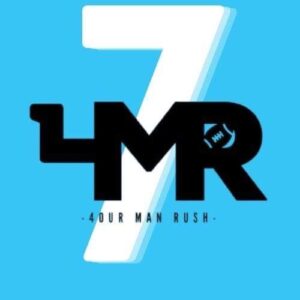