The new league year starts on March 16th, triggering the mad frenzy of transactions and signings. However, at the current point in the process, teams have set most internal evaluations aside and are focusing on talent outside the organization.

Let’s recap each position and see where the team might consider improving.

During the 2022 NFL Combine, General Manager Scott Fitterer mentioned that the QB job is wide open.

Darnold did not do enough to win the job even though he was tagged. Newton provided a spark, but not enough to win a game as the starter. The team extended Walker, but the reason is likely Temple nepotism.

Finding a franchise guy is likely what Matt Rhule’s job hinges on. They need to win now, and the room for error in developing a guy is slimmer than a hungry fat man’s patience.

I believe that Rhule could still draft a QB in the 2022 NFL draft and have them sit while Garoppolo helps prove that the current regime can win football games.

The Deshaun Watson rumors continue to swirl, but acquiring him would not leave much salary cap or draft capital to improve the rest of the roster.

McCaffrey is still the offense’s centerpiece, and it’s obvious.

The team scrambled to replace his rushing and receiving production when he got hurt. They leaned heavily on rookie Chuba Hubbard and free agent Ameer Abdullah. They showed flashes but could not sustain a high level of play.

I can’t see the panthers going out of their way to bring in another back, but I don’t think Chuba Hubbard did enough to lock down RB2. Adding a competitor for the RB 2 battle is more likely than a back to split reps with McCaffrey.

I can see the Panthers signing a lower-level veteran in free agency, preferably one with a varied skill set. The biggest name to watch in this position is probably Marlon Mack from the colts.

There is an outside chance we could see a Le’Veon Bell sighting, as McCaffrey has said he models his game after.

A talented room hampered in part by the play of other positions. In the middle of the season, they did have a rough stretch as a group where drops plagued the unit, but they eventually steadied out.

Most of the questions for this unit are on Special teams, as both Zylstra and Erickson, who were vital special teamers, will be free agents.

There’s no need to panic for this position group. The future is still bright for Marshall Jr and Smith. Anderson and Moore would both benefit from a consistent QB.

The Panthers resign WR Brandon Zylstra to a two-year deal.

The Panthers have selected WR Velus Jones Jr. in the 2022 NFL Draft.

Zylstra finally got to play a little bit on offense and presented himself as a solid 4th option in the room.

The 2022 NFL Draft has a decent amount of WRs as well. They nab one with Kick Returning abilities and speed to test defenses.

Tight end has become an afterthought for the panthers throughout the past few seasons.

The team worked out a deal to keep Thomas by the request of offensive coordinator Ben McAdoo. It’s probably still Tremble’s room, as he got involved in many ways last year, rushing and receiving.

I think the Panthers are ready to roll with what’s in the room as of right now. There are some good TE prospects in this draft, so they might secure one if one slides into one of their later-round picks.

Come draft day, id keep an eye on TE Jeremy Ruckert, and if he slides into day 3, he might be a guy McAdoo likes.

There were a couple of times when individuals looked solid this year, but these guys are terrible as a unit. Some of that is obviously on coaching.

Rhule mixed and matched and experimented all season, including moving his franchise RT to LT for a game.

The whole building is aware that the team needs more long-term answers at this position. They also need short-term solutions, as they will need to find a center.

Campen has brought in to having Christensen play LT, and I believe he takes Brown up on learning some Center.

I can see the panthers solidifying the interior by adding Scherff. They have reworked current contracts to create more cap space, and this position group needs it sorely.

Munford adds even more versatility as he played LT for a few seasons and voluntarily moved inside to guard this past season. It will be a battle for the LG spot, and that’s the way it should be.

Pass rushing was one of the core foundations of early success. Reddick and Haynes are among the most talented rushers in the room, and both could test the market.

The unit had a tough year once teams figured they could go jumbo and move the speedy edges.

There is young talent in the group that needs playing experience. The group could use a retool to keep the speed on the field without sacrificing contain, but not a significant overhaul.

The Panthers have agreed to terms with DE Marquis Haynes.

The group will need to retain one speedy guy. I doubt they will outbid Reddick suitors, as they use that cap space on more pressing needs.

Gross-Matos, Nixon, and Hoskins are given more snaps and the opportunity to start.

Shaq Thompson had one of his best years as a pro, and free agent Jermaine Carter finished as a bit of a disappointment.

Frankie Luvu was a firecracker all year on special teams and defense. He will probably be competing to start next year.

With Carter Jr. likely testing free agency, the Panthers could use a young backer to develop.

The Panthers select LB JoJo Donmann in the 5th round.

Rhule looks to add more run and hit high motor guys, who can add a little versatility to the team. Keep an eye on names like Chad Muma and Jack Sanborn.

The cornerback spot is one of the strengths of a young defensive unit. There are two starting-caliber FAs in the group, but the team has a pair of first-round corners behind them.

They could also move a player here to recoup a day-three pick. Bouye will be a name to watch for that.

If Phil Snow plans to play a similar defensive scheme, there’s no secret that they need guys they can trust in man coverage.

You can’t let both Gilmore and Jackson walk and be an effective defense next year.

The Panthers have come to terms with CB Donte Jackson before entering free agency.

Agent Bus Cook was spotted weeks ago leaving the team offices. There are only two players on the team who has him as an agent: Cam Newton and Donte Jackson.

I don’t know that Carolina wants to get into a bidding war for an elite corner like Gilmore, not to mention they won’t have the means. Corner is absolutely something that needs to be addressed in free agency, though.

Chinn joined a young group of unheralded safeties after playing mostly an LB and nickel role his first season.

The group played strong vs. the run and flew around most of the season but still lacks a true center-fielding safety, and it showed at times last season in coverage.

It’s possible that Chinn or Robinson eventually become that player.

Burris is probably walking. They’ll need a guy that can start opposite Chinn.

The Panthers select FAMU S Marquise Bell in the 6th round of the 2022 NFL draft.

Whitehead wreaked havoc against the Panthers last year, and Todd Bowles’ defensive philosophy is as aggressive as they come.

A move like this might appear as a luxury, but a fast, intelligent physical safety is one of the final needs to have a complete defense. 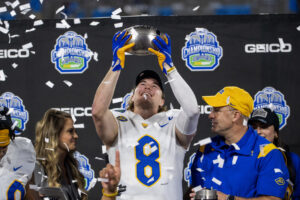