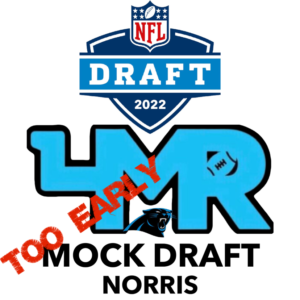 There’s still four weeks left in the season, but the Panthers’ chances of making a playoff run are pretty much over. So, what do we do when the season is over? Mock drafts. Mock drafts as far as the eyes can see. After all, the only thing we have to look forward to now is the offseason.

This is the first of many mocks that The 4 Man Rush will do over the next few months. Keep in mind that this is far too early to be an accurate mock. Rankings will change, some players will stay for their senior year and players will rise and fall after the Combine.

NFLMockDraftDatabase.com is the site used for this particular mock draft. If I had to guess, Carolina will probably be in the top six by the end of the season. They’re currently projected to pick eighth, so that’s where we will be drafting here. Granted, I’m betting Fitterer will be trading back some to recover some day two picks that were lost to trades this year. With all that said, let’s get started, shall we?

The way to fix one of the biggest issues that Carolina has, is to draft a dominant left tackle in the first round. Ekwonu fits the bill. He’s everything that an NFL team looks for in a left tackle and would be a day one starter. Ekwonu is one of the most powerful linemen in this draft and creates movement upfront in the run game. He has good length and lateral mobility and is really good in pass protection. Ekwonu is extremely competitive and has a high football IQ. This would be the smart pick here.

I know Matt Rhule think Christensen is more of a guard and they also have Deonte Brown waiting in the wings. However, Munford was just too good to pass up here. Like Ekwonu, Munford would be an immediate starter. He was a four star recruit coming out of high school. Munford is powerful, agile and has all the things that NFL teams look for in a guard. Guard is another position that has been a question mark this year. Solidifying one of the guard spots is a must in this draft.

Matt Paradis has likely played his last game with Carolina, as his contract expires this offseason. He is 32 years old and has struggled some over the last couple years, so it’s not likely that Carolina re-signs him. Enter Alec Lindstrom. He may have to sit behind Elflein for one season, but he’s a future starter at center. Lindstrom has notable strength with a finisher’s mentality. He comes from a football pedigree, as his father was a Hall of Fame lineman at Boston University and his brother plays for the Atlanta Falcons. Lindstrom was the best pick here and will help solidify the offensive line.

It’s no secret that Jermaine Carter has been a mixed bag at middle linebacker this year. Muma would likely come in and be a starter on day one on this defense. He is really good in the run game due to his instincts. Muma doesn’t miss tackles and is really good in the open field. He’s good in coverage and can keep up with running backs. He has good awareness and soft hands. A true three-down linebacker. This kid will be difference maker on any defense. In his senior year at Wyoming, Muma amassed 129 tackles (7.5 for a loss), 1 sack, 3 interceptions, 1 fumble recovery and 2 defensive touchdowns. He was also a finalist for the Dick Butkus award and named an All-American.

This pick isn’t to take Tommy Tremble out of the equation. It’s to give our quarterback another weapon. Likely is a force at the tight end position. He’s physical, athletic and is a mismatch nightmare for defenders. Likely can stretch the field and make big plays consistently. Has the speed to get away from linebackers and has a good catch radius. He would be a valuable piece in an offense that needs all the help they can get.

NO PICKS DUE TO TRADE

Carolina gets a Watson in the offseason, just not the one that fans want. Watson is an explosive deep threat and red zone target, which is something that Carolina needs badly. Consistently hit 22 miles per hour on his routes during his 2019 campaign. Last season, Watson had 39 catches for 739 yards (18.9 yards per catch) and 7 touchdowns. He also ran the ball 13 times for 120 yards and a touchdown. This would be an underrated pick for Carolina in the fifth round.

This late in the draft, the team is just looking for depth. Lake has the NFL pedigree in his blood. His father is Carnell Lake, former NFL Pro Bowl Safety and member of the 1990’s All-Decade team. Last season, Lake amassed 53 tackles (2 for loss), 6 passes defensed and 3 interceptions. Lake will make contributions on special teams in 2022.

Every team needs backup offensive linemen. So, why not get a guard from one of the best college programs? Shaffer is a strong blocker with violent hands that will open running lanes. He could be a diamond in the rough with proper coaching.

It remains to be seen what Scott Fitterer will do in the upcoming draft, but it’s safe to say he will do some wheeling and dealing. Some people might ask why there was no quarterback selected early. Well, the Panthers need to build this offense from the inside out. You don’t want to put a rookie quarterback behind Carolina’s current offensive line. Not to mention, Kenny Pickett and Matt Coral will likely be gone for Carolina picks. Would you be satisfied with this draft? Let us know!