Much like the stock market, the nature of life on an NFL roster can be one with its share of ups and downs. For players and investors alike, the goal is to add value to their portfolios and avoid losses.

However, the highs are not always consistent. The lows are bound to come. The best in both fields are skilled in reacting correctly to good and bad days.

With one preseason game in the rear-view, let’s review the lowest fallers and highest risers. 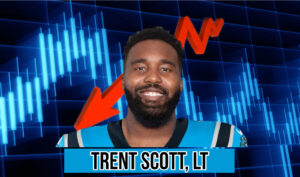 Trent Scott came into camp as one of the players set to challenge for the starting LT spot. Unfortunately, his outing this game did not fully confirm his ability. The Colt’s speedy pass rushers gave him fits and forced a false start infraction from Scott.

It was not a completely bad day for Scott, as he did his part in blocking a T-E stunt from the Colts front, but this outing probably will not help him earn more snaps at LT with the first team. 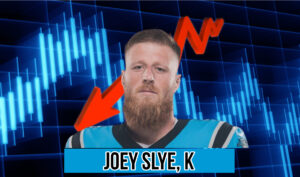 Joey Slye started the game strong with three conversions from 29, 28, and 41 yards, respectively, but he would then miss an extra point and a 63-yard field goal back-to-back.

On the day, Slye was 4/6 on kicks. The deep 63-yard attempt notwithstanding, he didn’t have a bad day. Still, Slye hasn’t laid the concerns at kicker to rest for the team either. He could find himself in another kicking competition before the season opener this year. 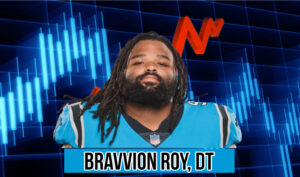 Roy got the start against the Colts and was, for the most part, a non-factor.

He was consistently moved from the point of attack by the Colts OL and appeared to have trouble disengaging blocks and getting into the backfield against one blocker.

He doesn’t play a stat-padding position, but the team will need to revisit the rotation structure if he doesn’t improve at eating blocks and getting off blocks. 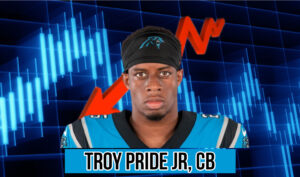 Troy Pride Jr. started behind the 8-ball when the team released their unofficial depth chart. He was the 7th corner listed after seeing meaningful playing time last season.

The Colts seemed to pick on Pride, and while he made some solid plays, he gave up consecutive chunk plays that led to a Colts score.

Pride Jr. also sustained an apparent knee injury and required a cart to leave the field. Hopefully, the injury isn’t severe, and he can continue to compete for snaps. 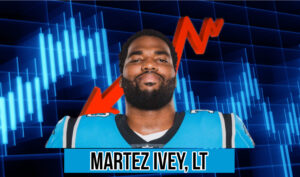 Martez Ivey had the roughest game of all the players. He had to wait until well into the second half to get snaps at LT.

When the Panthers faced a crucial 3rd down in the 4th quarter, he committed two of three consecutive false start penalties, turning a 3rd & 2 into a 3rd & 17.

He is already on the bubble as the 4th left tackle listed on the depth chart. 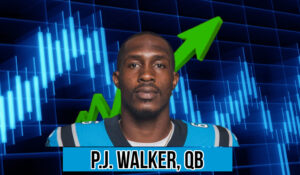 P.J. Walker proved last season that he could stick on an NFL roster after staving off Will Grier for QB 2 on the depth chart. But, unfortunately, the issue that showed up in his lone start was decision-making.

Walker showed improvement in that area and was still able to show off his arm talent. He left some yards on the field by not running when he had the opportunity, but Walker will remain QB 2, and he might even force the coaches to consider a legitimate competition for the starting job with Sam Darnold. 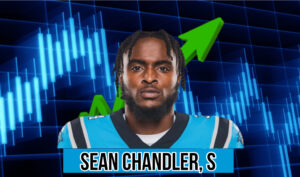 He got the start opposite Sam Franklin and made a huge defensive stop on 3rd down to get the defense off the field. The team used him at both safety spots, and he looked effective in that role.

His performance might open the door for a battle with Juston Burris for 1st team reps. 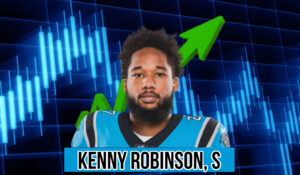 Kenny Robinson did a little bit of everything for the team on Sunday.

He is primarily a free safety but showed his desire and willingness to tackle in run support. That desire yielded a big hit on the ball carrier. Robinson also secured the lone INT for the panthers on the day.

Along with Chandler, Robinson brought energy to the defense. It would be a shocker not to see his snap count reflect his performance. 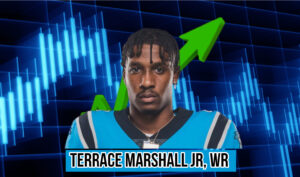 The drops that Terrace Marshall Jr. had early in camp did not carry over into the game. Instead, he was reliable and caught passes he should have. In addition to being sure-handed, he flashed his chunk play ability when he extended his route up the sideline for a 60-yard catch-and-run.

Coach Rhule mentioned that he would bring Marshall Jr along slowly as he recovered from his injury, but it appears that he may be more ready than projected. 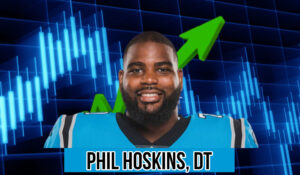 Hoskins was the highest riser on Sunday.

He successfully beat his blocker when in a 1-on-1 situation consistently. To adjust for this, the Colts tried to double team him and get him off the spot, and Hoskins did not give up much ground.

He defeated block attempts with his hands and footwork, which other interior d-linemen did not display in Sunday’s game. Hoskins should shoot up the depth chart if he can carry this momentum.