This warm humid morning practice added 11 on 11 drills for the first time. WR Robby Anderson was held out of practice by the trainers for an illness. No details were given. LB Frankie Luvu was taken off the COVID-19 list today but did not do any team drills. He must have two negative tests 24 hours apart before joining the team.

QB Sam Darnold 1st play was a pass that went right thru the hands of WR DJ Moore and into the hands of Jeremy Chinn who ran it back for a Pick 6. However Darnold went on to complete the next five passes for first downs.

CB Jaycee Horn got beat for TDs by WRs Omar Bayless and Keith Kirkwood.  The coverage was not bad at all but the passes thrown were on target. Horn did bounce back with two pass deflections.

RB Christian McCaffrey had broke off about four runs where he was looking in prime midseason form.

WR Terrence Marshall Jr. is showing why he is worthy of being a 2nd round pick by getting open on intermediate routes and making tough catches.

DT Derrick Brown and Daivyon Nixon were taking turns getting TFLs in the backfield on the RBs.

Overall during this session had it been a real game the defense would have had 6 sacks 4 TFL and 2 forced fumbles. Now the offense did show it could run the ball effectively at times and when given good pass protection that short and intermediate throws can be converted into 1st downs. 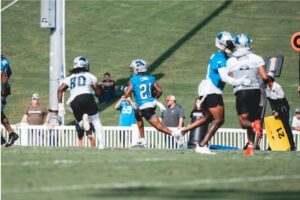