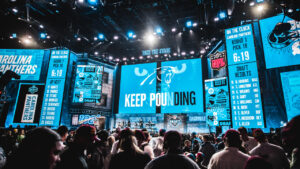 There are also question marks at left tackle, corner, guard, defensive tackle and even safety for the Panthers. Carolina’s had a very good offseason and filled the holes, but they could still upgrade these positions if a player presents themselves in the draft. Let’s have a refresher of these acquisitions:

That’s a pretty good offseason for a team that had a lot of missing pieces. They’ll look to upgrade left tackle, corner, guard and maybe defensive tackle in this draft. Carolina picks at number 8 in a very important draft and there are a lot of good players from which to choose. So, what are the options Carolina could have in the first round?

This would be the perfect scenario for Carolina. Sewell has been mocked all over the top eight in the draft, so it’s uncertain whether he will be there for Carolina to pick. If he is, Fitterer needs to run to the podium himself and announce the pick. Sewell is considered a generational talent at left tackle, a position that has been a turnstile since Jordan Gross retired. Sewell has a very high football IQ and plays with outstanding power at the point of attack. He has good hand strength and can move defensive players effortlessly. Sewell would be a home run pick for Carolina.

If Sewell isn’t there at eight, the Panthers should look to solidify another position of need. Carolina has struggled in coverage since the departure of James Bradberry, so they need another shut-down corner in the near future. Surtain has football in his blood, as he is the son of three-time Pro Bowler Patrick Surtain Sr. He’s the best corner in the draft and would make Thieves Ave. relevant again. This could be the route they go, as left tackle is really deep this year. Getting Surtain in the first and a dominant left tackle in the second round would be a win.

While Surtain would be a stud, Carolina could still elect to snag a left tackle in the first instead. Slater should be there and would be a solid pick for the Panthers. Some scouts are worried about Slater’s arm length (33″) and think he should move inside to guard. However, he will be able to play left tackle at a high level. The standard for arm size for left tackles is 34 inches or longer, but you don’t have to look far to find tackles that have had success with shorter arms. Carolina’s own Jordan Gross measured in at 33 1/4 inches and had a long and dominating career at left tackle. Slater is powerful, agile and smart. In 2019, he held his own against Chase Young, who was the second overall pick in 2020 and also rookie of the year. There isn’t much of a drop off between Sewell and Slater and he should be a Pro Bowl left tackle for a long time. Side note: There are whispers that Carolina may like Slater more than Sewell.

Carolina could elect to get the best all-around player in the draft at pick eight. There’s no denying that Pitts would make this offense even more dynamic and give Sam Darnold another weapon. Rhule and Fitterer really like Pitts (I mean, who doesn’t?) and could draft him and get a left tackle later in this deep draft. While Pitts is listed as a tight end, he can line up as a receiver too. He has elite hands and has mastered the ability to grab any pass thrown his way, even if the ball is poorly thrown. Pitts can get yards after the catch similar to DJ Moore, he has a high football IQ and is just an all-around good guy. Like Sewell, Pitts is considered a generational talent and would be one of the faces of the franchise for years. Which is why it’s very doubtful that Pitts is there at eight. But if he is….

One of the main takeaways from free agency is that Fitterer filled the roster with solid pieces at every position of need. Carolina can go into this draft with the ability to take the best player available, regardless of position. That could very well be Ohio State phenom Justin Fields. Fields could go anywhere between pick 3 and pick 15, depending on who you ask. There’s no doubt Fields would be the quarterback of the future, even with the Sam Darnold trade. There is some intrigue for Carolina, as there should be. Getting Fields could get Carolina the quarterback of the future, and they could still build the offensive line on day two.

Even with the loss of Curtis Samuel, wide receiver isn’t really a need for the Panthers. With that being said, Carolina could elect to take Jaylen Waddle, who is probably the most balanced and talented receiver in this draft. Waddle can play any receiver position on the field. He has the ability to gain separation quickly and has soft hands to catch anything thrown his way. The only reason Waddle may fall to pick eight is because of his injury last season, which shouldn’t be an issue any longer. Getting another weapon for Darnold could elevate this offense to another level, as long as they’re able to solidify the offensive line with some of the next six picks. Side note: Robby Anderson is going into his last year under contract and DJ Moore only has two more years, provided the Panthers pick up his 5th year option. Taking a wide receiver is a very real possibility, depending on who’s there at eight.

With new general manager Scott Fitterer at the helm, the team will be in every deal and will have every option available to them. Trading back in the draft and gaining more draft capital is something that is absolutely on the table for Carolina. If player they love isn’t there at eight, Fitterer could elect to trade back a few picks and gain extra picks, depending on what is offered. If Carolina was offered an additional second or third round pick to move back 5-8 spots, it would probably be hard for Fitterer to say no. Especially given the fact he came from Seattle, who traded back quite a bit.

In recent years, it’s been fairly easy to pinpoint who Carolina was going to take in the draft. This year it’s a little harder, as there’s a new general manager and there’s a lot of good players in the first round. Also, there’s been little information about players that have met with the Panthers virtually. The Carolina staff did benefit from coaching in the Senior Bowl, so that helped the scouting process immensely. No matter what the Panthers decide to do in this draft, they’re going to get a great player in the first round. With any luck, they’ll knock this draft out of the park, just like they did last year. It certainly helps to have all of these options at their disposal.