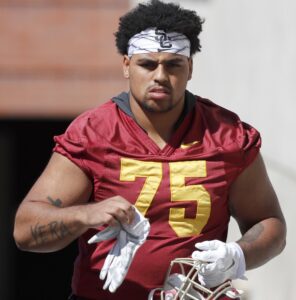 Alijah Vera-Tucker was a two-way player at Bishop O&#39;Dowd High School
in Oakland, CA. He played four years as an OT and as a DT. By the end
of his senior year in 2016, he had won the state’s Class 5AA
championship, first-team USA Today All-California, 19th best OT
nationally, and 141st best player nationally. He committed to the
University of Southern California.
Vera-Tucker decided to redshirt his true freshman season in 2017.

As a redshirt freshman in 2018, he got back up reps in all 12 games at RG and
special teams.
Switching to LG in 2019, he started all 13 games during his redshirt
sophomore year. That resulted in him winning USC’s Offensive Lineman
of the Year and Associated Press All Pac 12 First Team.
His 2020 season began with him opting out. Vera-Tucker eventually had a
change of heart and played in all six games at LT. He was selected All
Pac 12 First Team, All American Honorable Mention, and the Morris
Trophy winner as the best offensive lineman in the conference voted on by
opposing defensive linemen.

● Sometimes gets pushed back too quickly
● Needs to stay engaged with blocks longer on pass plays.
● Could look for more opponents to block after the primary assignment.
● Needs to have better hand placement inside the pads of his defender
● Sometimes beaten by inside moves when over committing to the outside

Alijah Vera-Tucker’s natural abilities are best suited for zone blocking
schemes. He can also be effective in power-run schemes too.
He can play both LG and LT at a highly effective level. There is concern
that he does not have the ideal height for a prototypical NFL LT. His
athleticism and nasty demeanor will allow him to thrive on the interior as
an NFL guard.
His football smarts and awareness will allow him to start right away and
potentially be a Pro Bowler in a few years.