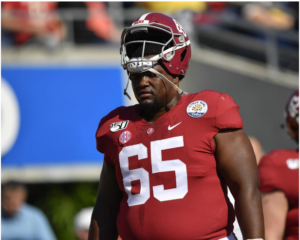 Deonte Brown came out of high school as a four star prospect who was
ranked as the 6th best offensive guard nationally. He chose Alabama over
Auburn and Tennessee.
He redshirted his first year in 2016. In 2017, he played in all 14 games, but
only on the field goal block unit and as an extra lineman in some offensive
formations.

During the 2018 season he started five games at left guard but was
suspended for the two BCS playoff games.
After missing the first four games of the 2019 season due to suspension
he started the nine remaining games at right guard. He more than held his
own in the much hyped battle between him and Auburn All American
Derrick Brown. In that game he only allowed 1.5 hurries, no sacks with no
penalties.
His senior season in 2020 saw him be named preseason 1st team All
American, 1st team All SEC and named to the Outland Trophy Watch List.
Overall he played 843 snaps but missed only two assignments, committed
four penalties, allowed 0.5 sacks, one QB pressure and five QB hurries.

● Can effectively play both LG and RG.
● Extremely powerful functional strength.
● Plays with a great balanced anchor in both run and pass plays
● Very solid quickness with arms and feet movement.
● Very consistent with hands making the initial contact
● Good awareness level and solid football IQ.
● Dominant run blocker that can get to the 2nd level
● Effective pass blocker that stops inside rushes.

Deonte Brown’s natural abilities are at their best at power man blocking
schemes. His ability to move for his size will allow him to open up huge
holes wherever he goes. Brown plays with that nasty mean streak that can

set the tone. Still can use some coaching up to refine some fundamentals
to elevate him to the next level, But definitely in short yardage situations
he is the one to run behind.