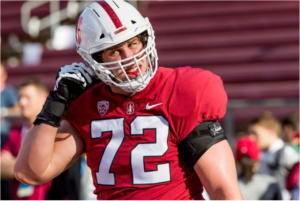 Walker Little was a 5-star recruit out of Bellaire Texas who started Varsity since
his freshman year. After choosing Stanford over 33 other D1 programs he got his
first start in Stanford’s 3rd game of 2017.

He was the first true freshman to start at left tackle in 17 years. During that
season, he received the Stanford Football Freshman of the Year award.
After a productive 2018 season at left tackle, he received first-team All Pac 12
honors. One notable achievement for Little was the Stanford University Athletics
Block “S” Award which speaks to his production on the field and high character
off the field.

Although he received Quentin Nelson-like buzz from scouts around the NFL he
opted to return to Stanford for his Junior year. Unfortunately, he suffered a

season-ending knee injury against Northwestern. He opted out of the 2020
collegiate season and declared himself for the NFL Draft on September 10th,
2020.

● Looks the part. Outstanding size and length for the position.
● NFL DNA.
● Elite Footwork and lateral ability for his stature.
● NFL ready pass set fundamentals
● Strong hands and punch.
● Great awareness to pick up stunts and blitzes.
● Willingness to be physical in the run game.
● Anchored one of the best run games in the nation

● Hasn’t consistently shown the ability to finish on 2nd and 3rd levels
● Has struggled against athletic edge rushers
● Routinely loses reps against rushers who have strong club and rip moves.
● Not as nasty as he could be. Flashes the ability to play the whistle but doesn’t do
it consistently

Little has all the tools to be a perennial pro-bowler in the NFL. Has the ideal
athleticism and feet to be elite in pass sets. Play strength is also a plus.
Though he gained ample first-round buzz early, a season-ending injury in 2019,
coupled with a COVID-19 opt out in 2020 has left a lot of questions out there about his
draft stock.
A bad game against Notre has made scouts question if he can be a day one
starter in the pros. With durability being a glaring concern, it will be interesting to
see where he lands in the draft. With good health, Walker Little can be an
effective left tackle in the NFL.