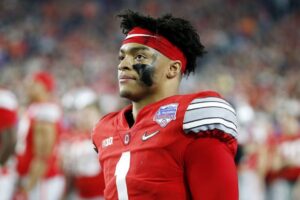 Justin Fields was recruited to be the Quarterback for the Georgia Bulldogs in 2018. He saw minimal action.

In the 2019 season, Justin Fields transferred and became the starting QB for the Ohio State Buckeyes. He led the Buckeyes to an undefeated regular season, with 3,757 yards from scrimmage, 51 total touchdowns, and three interceptions. Fields and the Buckeyes lost to the Clemson Tigers in the College Football Semifinals.

In 2020, Fields was named preseason second-team All-American by the Associated Press. Covid-19 shortened the Buckeye football season, but Fields led the Buckeyes to an undefeated regular-season record (6-0) with 2,483 all-purpose yards, 27 total touchdowns, and six interceptions.

The Buckeyes defeated the Clemson Tigers in the College Football Playoff Semifinal and subsequently were defeated by the Alabama Crimson Tide in the National Championship game.

Justin Fields had the best showing of his career against the Clemson Tigers. He also showed toughness in that game, as he sustained a rib injury on an illegal hit. He played the rest of the game and finished with 385 passing yards and six passing touchdowns.

The Ohio State Buckeyes run many concepts that only require the QB to read half the field at a time, leading to quick and easy decisions. He will likely need to improve at feeling comfortable going through multiple progressions, even though he did put some of that ability on film.

His desire to make the throw downfield led to him neglecting a running lane, but his pocket awareness was, for the most part, adequate. He’s tough to tackle behind and beyond the line of scrimmage. If a team is willing to sprinkle in some Run-Pass options for him, Fields will prove to be a valuable franchise QB before long.

Overall Grade: 5.8 (Starter within one year)