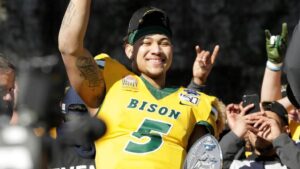 Trey Lance, who is originally from Canby, Minnesota, was not widely recruited by top schools. As a senior at Marshall High School in Minneapolis, Minnesota, he was just a three-star recruit, most schools that did show interest in him wanted to play him at Defensive back or Wide Receiver. He committed to the FCS powerhouse program at North Dakota State University in December 2017.

In 2019, Lance thrust himself into the National Spotlight. As just a redshirt-freshman, Lance won the starting job at NDSU. He amassed 3,886 total yards, 42 total touchdowns, and no interceptions.

The 2020 NDSU football season was canceled due to COVID-19, but the Bison played one contest versus the Central Arkansas Bears, where Lance had 292 total yards, four total touchdowns, and an interception.

Lance declared himself for the 2021 NFL Draft in October 2020. He finished his collegiate career with 4,272 total yards, 48 total touchdowns, and only one interception.

Scouts and front offices are likely to view Lance as a project QB. He had only one game to his credit in 2020 as the other top 5 QBs have had a full season and bowl games to get in a rhythm. Just one full season as a starter will make teams pause when marking him on their Big Board.

Be that as it may, Lance is not as much of a project as the media will make it seem. As a redshirt freshman, he made pre-snap checks at NDSU. He showed good pocket presence and made good decisions with the football. He is the best rushing quarterback in this draft class, and one could make a legitimate argument that he also has the strongest arm of the draft class.

There are still things he can add to his skill set to make him more lethal at the next level, however. He has the velocity to drive throws into tight windows, but it would be good to see a bit more anticipation on out-breaking throws.

Teams that draft Lance should allow him to make the most of his skillset with plenty of designed QB runs and run-pass options mixed in with their scheme. Even if NFL front offices don’t believe Lance is ready to start right now, he has all the tools to be a headache for defensive coordinators across the league.

Overall Grade: 5.5 (Starter within one year)