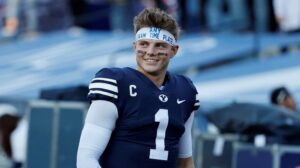 Zach Wilson originally went to High School in Draper, Utah. During the recruiting cycle, he was rated as a three-star prospect by ESPN and received offers from the Mountain West Conference programs and Independent programs. Wilson committed to Brigham Young University in December of 2017.

For his freshman season, Wilson played in 9 games for the Cougars. Wilson started seven games and became the youngest starter in school history. He finished the year with 1,799 total yards, 14 total touchdowns, and three interceptions.

Wilson had his best statistical year in 2020, where he put up 3946 total yards, 43 total touchdowns, and three interceptions. Following a strong 425 passing yard, three-touchdown performance in the Boca Raton Bowl, he declared for the 2021 NFL Draft.

Zach Wilson has one of the strongest arms in this draft class. He routinely makes cross-field throws with plenty of velocity. In 2020 he proved that he is adept at making chunk plays for his offense.

Even with a less than stellar receiving core and some bad drops, he still managed to have the 3rd highest yards per pass attempt and second-highest passing rate in the nation. He has shown the ability to feel rushers and navigate to a clean throwing platform.

Although his arm talent will help cover some of his flaws in the NFL, he can stand to work on his decision making. Wilson will often extend plays by keeping his eyes downfield when there is an open underneath receiver or a running lane. Sometimes his desire to hit the big chunk throw will leave him inconsistent in feeling the rush.

In the NFL, Wilson should be ready to use his legs more when the opportunity presents itself, but for his ability to extend plays and flip the field with a flick of the wrist, he will be seen as a top QB prospect. His arm will allow him to come in from college and be a difference-maker right away, even if there’s still plenty of room for improvement.