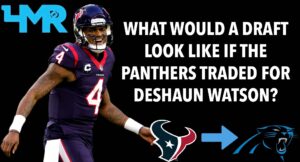 It’s been less than two weeks since news broke that DeShaun Watson was unhappy with the Texans’ brass and wanted out of Houston. The very minute that the news broke, a lot of Carolina fans started drooling over the fact that a young franchise quarterback could be available via a trade. A trade that would likely involve three first round draft picks or, at the very least, two first rounders and an established player like Brian Burns or DJ Moore.

If you go on any social media platform, you’ll see fans giving their opinions on whether or not to trade for Watson if he becomes available. Personally, I love Watson and think he’s one of the most dynamic quarterbacks in the league. He led the league in passing yards this year without having a number one wide receiver. However, I’ve been fairly vocal about not wanting to give up a lot for Watson. Mainly because we’d have a quarterback but wouldn’t have any draft picks to build a team around him for at least 2-3 years. (If that sounds familiar, see Newton, Cam)

Recently, I’ve started thinking about the “what if’s” of a trade for Watson. Mainly because Carolina just hired Sean Ryan, who has coached Watson, to be their Quarterbacks Coach. Given the fact that we still need a franchise quarterback, it could be worth a shot to try to trade for him. There’s already a pretty good core group on both sides of the ball, so maybe it wouldn’t be that bad, right?

Let’s say, Carolina lands Watson and gives up pick 8 and first round picks in 2022 and 2023. Could Carolina still build a pretty good team around him this year? Here is a mock draft that shows what Carolina could potential do if they traded for DeShaun Watson:

Eichenberg is a three-year starter for the Irish as a left tackle. He would be an instant starter at a position that the Panthers have needed since Jordan Gross departed in 2013. The 6’6 305 pound prospect is a monster in the run game and will hold his own in pass protection. He has good hands and decent lateral mobility. This would solidify a position needed to help Watson succeed.

Corner is a position that the Panthers desperately need going into next season. Carolina opted to pay Shaq Thompson instead of retaining James Bradberry, who had a Pro Bowl season in 2020. The Panthers have Donte Jackson, but that’s the only starting caliber corner on the roster. Hopefully Carolina re-signs Rasul Douglas, who played well last year, but getting Adebo here would help catapult the secondary. Adebo has good length and has really good man coverage and zone coverage skills. He’s also willing to lay someone out when given the chance.

With Curtis Samuel possibly leaving in free agency, Carolina could use another speedy receiver. Schwartz’s fastest recorded 40 yard dash time is 4.27 seconds. He has soft hands and great suddenness off the line of scrimmage. This pick would give Watson another weapon to use in Joe Brady’s offense.

Newly hired General Manager, Scott Fitterer, could be looking for different avenues for getting more salary cap space for the Panthers. Kawann Short could be one of the salary cap casualties due to the fact he has only played five games in two seasons and the Panthers could gain $9.7 million in cap space. Zach Kerr played well with Derrick Brown, but Carolina needs to add another defensive tackle to the rotation. Ray is a force against the run and would be a good two down threat. He won’t offer much on third down, but he’s the space eater that the Panthers could use right now.

5th Round (B) COMPENSATORY PICK

With Matt Paradis being the only starting offensive lineman (from 2020) under contract right now, offensive guard is a huge need. Kraemer could be a starter year one in the right offense, and I think that could be in Carolina. Pairing him beside Irish teammate, Eichenberg, could help his development tremendously. He’s a beast in the run game and will be sufficient enough in pass protection to offer Watson enough time to throw the ball. This would be a solid pick at this position.

Jaimes would come in and compete for a guard spot right away. He’s a versatile player that can play either tackle spot and either guard spot. Position versatility is something that Coach Rhule loves on his roster, so this is a no-brainer here in the sixth round.

6th Round (B) COMPENSATORY PICK

Fisher is one of the linebackers that Carolina gets to coach in the Senior Bowl this year, so they’ll get a real close look at him. He plays fast and physical. He’s mastered the Peanut Punch, as he’s caused ten fumbles in four seasons for the Wildcats. Fisher would give the linebacker room some much needed depth coming out of the sixth round.

To close out the draft, Carolina could snag a back up center. A three year starter for the Pittsburgh Panthers, Morrissey blocks with good hand placement and sufficient strength. Give him a year or two to learn from Paradis and he could possibly take over at center.

This would probably be a best case scenario draft outcome for Carolina and it would make Watson happy. Is a trade likely to happen? Probably not. However, the rumors are gaining some momentum. General Manager Scott Fitterer came out and said he will be aggressive with the roster while exploring every trade and free agent option. Make no mistake, Carolina WILL go after Watson this offseason, but they aren’t likely to have enough to beat out the Jets or Dolphins.

There’s no doubt that Watson would make the Panthers a much better team, but is it worth giving up the future? Scott Fitterer will also trade back some in this draft, as that was his M.O. in Seattle. Also, these draft rankings will change throughout the offseason, so some of these players will rise and fall. Either way, this will be an interesting draft and offseason for the Panthers.

Edit: It’s worth noting that Watson has a no-trade clause in his contract, which means he can’t be traded to any team without his consent. This could drive down the asking price and takes the leverage out of Houston’s hands. Fitterer will be aggressive this offseason and this roster will look a lot different.

Would this draft work for Panther Nation if Carolina also got DeShaun Watson?