Boy doesn’t it feel good to get a big decisive win?

Waking up this morning celebrating a 20-0 victory, after coming off a five game losing streak, truly does the soul some good and was right on time too. With Thanksgiving just a couple of days away Sunday’s game gave us a lot to be thankful for. Sure there are still a lot of things that need to be fixed with this roster. We likely aren’t playing for any type of playoff positioning this season. That being said there are three very winnable games still left on our schedule. This team is looking like they are starting to finally click. We could end the 2020 season on a high note with a couple of late season victories. No need to beat around the bush here so let’s jump right in to things.

The quarterback position is and has always arguably been the most talked about position in the NFL. They receive the most praise when their teams win and they receive the most blame when their team loses. So it’s only right that coming into this week’s game with Teddy Bridgewater coming off of a knee MCL sprain, that whoever would be named the starter at QB, was going to be the hot topic of Week 11. The decision to sit Teddy came one hour before kickoff and was a good one to make. So with Teddy out, PJ Walker was named the starter which would be his 1st ever in the NFL. Walker might not have been perfect in his debut, but he sure did play a very important role in helping Carolina coast to an easy victory over Detroit. Walker finished the game completing 70.5% of his passes. Some of his best highlights were beautiful throws down field to DJ Moore that resulted in gains of 52 yards, and a 17 yard touchdown pass to Curtis Samuel. However as I said earlier, Walker wasn’t perfect by any means. He threw  costly interceptions in our own end zone that prevented us from extending the lead to an even larger margin in both the first and second half. Walker also at times made this offense look a tad bit stagnant, while staring down receivers throughout the game. This was also a big reason for his turnovers. That being said, Walker did his job and never lost his composure which is all you really can ask for. We all should be very proud and happy as fans to know we potentially have found our new backup QB moving forward. 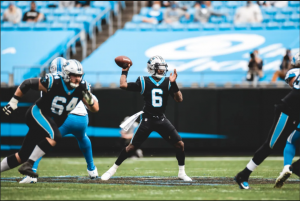 • A Defense We All Have Been Waiting For

I think it’s fair to say for the most part we as fans have all been a tad bit critical of Phil Snow and this new look defense as a whole. We’ve all at one point or another been critical of this “bend but don’t break” philosophy we currently play by in 2020. We’ve all had questions about this young core of defenders and about how they would actually adjust to the speed of the NFL. Or just how well would we play as a unit with no real off-season or preseason to go by. All of which are good reasons might I add. For a large portion of the season, our defense as a whole has looked subpar at best. Sunday’s contest felt a lot like this teams coming out party on the defensive side of the ball and I absolutely loved every second of it. Now let me start by saying, I recognize Detroit isn’t a playoff contending team and that they too have a laundry list of issues that needs fixing on their roster. I also say that to say our defense played lights out in Week 11 and I’m happy to see it. We held a Matthew Stafford led offense to 185 total yards for the day while also forcing them to punt the ball off a defensive season high six times. It’s also worth noting that all season we’ve struggled on defense with getting off of the field on 3rd downs and with getting pressure on the QB. We saw this defense excel at both at a very high level. Detroit was actually 3 for 14 on 3rd downs, and we sacked Stafford a total of 5 times along with 11 QB hits with Brian Burns leading the way. Burns simply had a monster day with 2 sacks, 4 QB pressures, 2 tackles for loss, 1 pass breakup and 5 total tackles. Match that with solid performances from Marquis Haynes, Efe Obada, Yetur Gross-Matos and Shaq Thompson and you can see why we pitched a shut-out yesterday. I could talk all day about this defense, but I’ll end it short with this. If we can get a full season of games like yesterday on the defensive side of the ball then 2021 looks to be a very promising year. 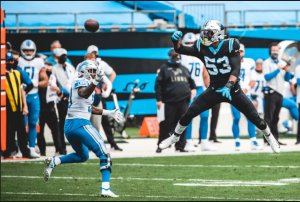 I’m keeping this segment short sweet and simply. DJ MOORE IS CAROLINA’S #1 WR. That’s it. That’s the point. After 11 weeks of football, Moore has quietly become one of the better WRs throughout the entire NFL. He’s currently ranked 4th overall in receiving yards and has done that with less targets and catches than Carolina’s team leader in Robby Anderson. Moore is currently leading the team in receiving yards (863), receiving TDs (4) and is also currently ranked 1st overall in yards per catch with 18.7. To make this sweeter, DJ is also on pace to break 1200+ yards receiving, on 60+ catches and will finish anywhere between 4-6 TDs on the year. This really isn’t even up for debate anymore. DJ Moore is a stud WR with elite upside and it’s about time we gave him that respect as fans. 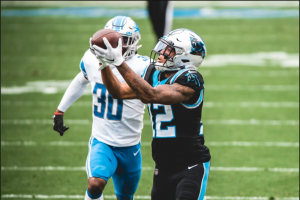 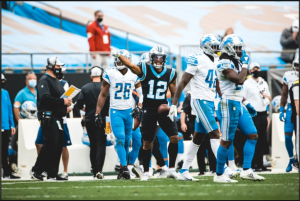 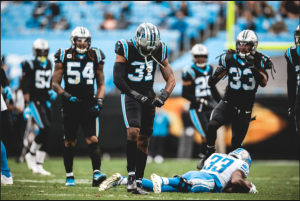 With Minnesota next up on our schedule, it’s going to be fun watching Teddy going back to the team that drafted him and potentially watching him compete.
I myself and all the fellas at the #4ManRush would also like to wish everyone Happy Holidays and to stay safe out here.
#KeepPounding Carolina fans