Losing to any divisional rival at any point of the season, regardless of the record of each team, is never fun. Sigh! I know I know. However, after watching yesterday’s game it’s actually kind of hard to be entirely disappointed about the overall outcome. Sure I get it! It’s never fun to lose and moral victories ultimately mean nothing in the NFL.

With that being said, we saw a game that was an even mix of being very entertaining and being very frustrating. We saw an offense that was able to effectively move the ball up and down the field via passing attack while also struggling to establish a running game. We also saw a defense that forced 14 3rd down opportunities yet also allowing 12 of those opportunities to be converted into 1st downs.  Frustrating, I know.

There is so much to break down and discuss from Week 7’s loss. With that being said let’s dive right in to things.

As proud as I’ve been of this new look defense that we’ve assembled this season, this past Sunday on the defensive side of the ball we looked absolutely terrible. Plain and simple. We were terrible at tackling in all aspects of it. Outside of Brian Burns, we were terrible at getting any real pressure up front from our defensive line. Our secondary looked horrendous with the absence of Rasul Douglas as the top cornerback. Our defense struggled all game with trying to contain Alvin Kamara who had a monster day with 148 total yards of offense on 22 total touches. Mix all of that up with allowing 12 conversations on 14 attempts on 3rd down, and it’s pretty clear why we ended up losing Sunday’s contest. There really isn’t much else to say about yesterday’s defensive performance other than we HAVE to be much better down the stretch of the season. WE SIMPLY HAVE TO! 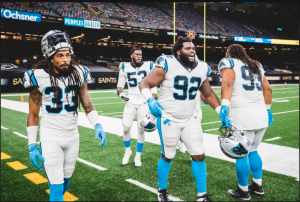 There has been a common theme with Panther fans since Steve Smith’s departure from the team back in 2014. That theme is we all agree that we desperately needed a “True #1 WR” in this offense. We also agree that we needed a WR that could keep defenses honest and stretch the field vertically while also being able to take pressure off of our other weapons on offense. Ladies and gentlemen look no further than #12 DJ Moore.

Yes I am aware that DJ has started the year off slow and that Robby Anderson has looked like our team’s new #1 WR for the most part. I don’t fully disagree with this notion and I also believe that the Panthers have put themselves in a very good position at WR. I truly do believe we now have the luxury of fielding two “#1 WRs” in Moore and Anderson at the same time. In addition they both have high upsides.

However, I’ve said this all year, and I will continue to say it. DJ Moore has the higher upside between the two receivers and showed it in yesterday’s contest. Four catches on five targets, 93 yards receiving, 23.3 yards per catch (YPC), and two TDs to top it all off. THIS is the DJ Moore that we all have been waiting for, and I don’t see him slowing down anytime soon. He finishes Week 7 currently ranked 7th overall in receiving yards with 567 yards on just 31 catches. He’s also currently ranked 7th overall in YPC (yards per catch) with an average of 18.2 yards per reception which is huge for this offense.

Each week we see Teddy Bridgewater’s bond grow more and more with DJ, which is also huge for this offense. One can only hope and imagine that this is just the beginning for this duo. With Christian McCaffery potentially coming back this week, we could see a much more efficient and a much more explosive offense down the stretch of the year. All and all, great game DJ! You deserve it. 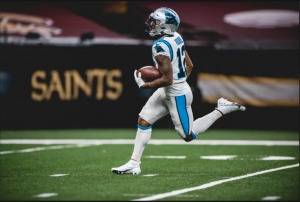 Keeping this segment short and sweet. It’s been seven weeks of nonstop chatter amongst Panther fans on who and what they believe makes a “Franchise QB”. Whether that is being a QB with crazy arm talent, a QB that makes great decisions with the ball, or a QB who can totally take over and dominate a game with his legs. All three things are very important when looking for a QB of the future and I truly believe you need a solid mix of all three to seriously be considered a franchise QB in the NFL. With that being said it’s time we all admit that Teddy is that even mix of all three that we’ve been looking for.

Teddy has proven he has the arm talent and ability to consistently take shots down field. He has also shown the ability to put the ball in places where only his WR’s can get to them. Let’s not forget that he has the needed athleticism to tuck the ball, move in the pocket and pick up yards with his legs when needed. He also has the accuracy and touch that you want when looking for a franchise QB. He’s a proven leader, a proven winner, and what I love most is, he’s unapologetic about how he approaches the game of football. It’s very simple, Teddy Bridgewater checks all the boxes for today’s “franchise QB” qualifications. It’s time we as a fanbase stopped looking for silly things to criticize this man about and embrace the fact that he likely isn’t going anywhere, anytime soon. I am proud to call this man our QB, and so should you.  #KeepPounding Teddy 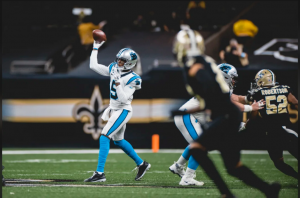 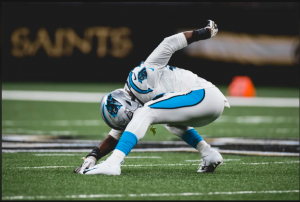