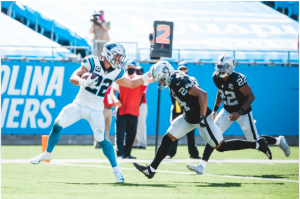 The 2020 NFL Season is finally here! Beyond all of the trying times of COVID-19 and the never ending battle against Social Injustice in America, the Carolina Panthers return to football has come back with perfect timing. We have a lot of different things to break down and cover so let’s jump right into it.

Week 1 Hot Takes w/ Monty
• Solid Performance by Teddy “2 Gloves”
It’s been a very long journey for Teddy Bridgewater with him battling back from a near career ending knee injury, back to a starting QB role in the NFL. So after showing flashes from last season in New Orleans, Teddy B has started off the 2020 season in good shape. Today we saw a very efficient, very composed, very poised and very confident QB. Teddy completed nearly 65% of his passes (64.7%), threw for 270 yards with a TD pass. And when needed, he escaped pressure by extending plays with his legs to pick up key first downs throughout the game. Now, by no means was his performance in Week 1 without mistakes. He actually struggled for most of the 3rd quarter with hitting WRs in stride down field, along with looking a little stagnant at times. However, it was also good to see him rebound late in the 2nd half with a 75 Yard TD pass to Robby Anderson to close a double digit defect. Moving forward I believe Teddy is in a perfect situation to thrive and be successful in Joe Brady’s system. I’d like to see a more aggressive QB at times, with him taking a more shots down field, but I also recognize that this all will be work in progress. So Panthers fans…”Buckle up and enjoy the ride!”
• Attack of the C-Mac / WRs struggle
Very simply put, Christian McCaffery is THE best RB in football. Also in other news, water is wet. We may not have turned out a W in today’s contest, but it definitely wasn’t because of “Run CMC” not showing up and showing out. On a Sunday where WRs not named Robby Anderson, were less than spectacular. In classic Carolina Panthers fashion McCaffrey carried this team offensively. On 23 carries, our guy rushed for 96 yards on the ground matched with 2 TD runs. He also tacked on 36 yards receiving on three catches, which ultimately put him over 100 total scrimmage yards for the day. As great as C-Mac was in Week 1, it was disappointing to watch DJ Moore and Curtis Samuel struggle throughout today’s competition. Both had costly 3rd down drops that would have extended drives in key moments of today’s game. To add insult to injury, DJ Moore got hit with a bonehead penalty for unsportsmanlike conduct for taunting, which killed our momentum in the middle of the 3rd Quarter. We absolutely HAVE to see more from guys like DJ and Curtis moving forward.
• Defensive Woes from a Young Core
Coming into the 2020 season most Panthers fans knew that our defense would likely be the “Achilles heel” of our team. We are simply too young, and too inexperienced in way too many different areas. Match that with a first year NFL Head Coach and Defensive Coordinator, we are bound to make plenty of mistakes in 2020. We are still incapable of stopping the run, our LBs look to be a liability in coverage, and our secondary desperately missed Donte Jackson today, who was injured early in the 1st QTR. It seemed like after the very first drive of the game, the Panthers defense had absolutely no answer for the Raiders offense and it’s quick passing game. QB Derek Carr had his way with our defense all game, and RB Josh Jacobs ran the ball down our throats. Rookie CB Troy Pride Jr was baptized by fire today with multiple blown coverage assignments down field which resulted in chunk plays from the Raiders. That being said, Rookie SS Jeremy Chinn was all over the field today and looked very comfortable in Snow’s system. Chinn finished 2nd in tackles for our defense today with 8. Rookie DT Derrick Brown looks like he’s going to be a monster on the interior once his fellow defenders learns to mesh with one another as the season continues. We didn’t see much from 2nd year DE/OLB Brian Burns today, which is a little disappointing and something to keep our eyes on. All an all, we have A LOT of growing to do Defensively but the talent is there to be molded correctly. 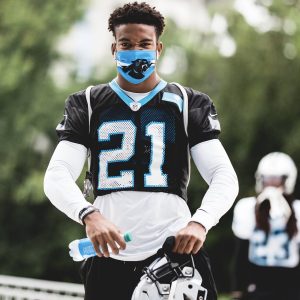