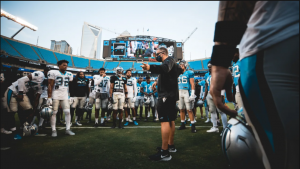 At this point in every training camp the enemies of progress are: Time, Health and Fatigue.
Coach Rhule and his coaching staff have identified a fourth adversary: Monotony.

On Wednesday August 26 the team once again took the field inside Bank of America Stadium. Unlike the
Saturday session on August 22 though, this session served as a faux Panthers Fan Fest, which allowed fans across North Carolina, South Carolina and parts of Virginia to get their first 2020 Panthers broadcasting experience.

The team even went as far as rotating jerseys on Friday with the offense dawning the white, and the
entirety of the defense took on the black that has signified starters throughout camp.
They seem like small adjustments, but Coach Rhule mentioned the importance of not just going
through the motions.

Here are the takeaways from the second week of training camp……

Quarterbacks:
● PJ Walker (QB #6) seems to have moved into the second string QB role this week. During Tuesday’s session, he appeared to lead the second-team offense and when starter Teddy Bridgewater (QB #5) sat some Friday 11-on-11 sessions out, Walker was under center in his place.

● Will Grier (QB #3) flashed the ability to throw the deep ball all week, but he did turn the ball over twice during Friday’s practice session.

Running Backs:
● It seems as though Mike Davis (RB #28) has all but secured his spot as the second string running back. For the second week he has received carries with the second-team offense.

● Myles Hartsfield (RB/S #38) is still getting snaps at running back and appears to be in a battle for snaps with Reggie Bonnafon (RB #39). The team has provided Hartsfield with an extra penny jersey for when he changes positions, so it is fair to say they want to continue to see him at both spots.

Offensive Line:
● The starting unit for this past Wednesday evening’s practice sessions appeared to be Russell Okung (LT #76), Dennis Daley (LG #65), Matt Paradis (C #61), John Miller (RG #67), and Taylor Moton (RT #72).
● Tyler Larsen (OL #69) had a tough go with injuries this camp, as he sat out multiple days of practice this week. He looks to be the teams’ back-up center and has experience playing guard for the Panthers as well.

Tight End:
● Chris Manhertz (TE #82) was recognized for his blocking by Coach Rhule last week, but Teddy Bridgewater looked to help diversify his skill set. The two found a bond over the game of basketball, according to Manhertz, and the duo practiced extra on Wednesday after the conclusion of practice working on routes.

● Temarrick Hemingway (TE #84) started his week fast with a beautiful one- handed snag on Monday. He was nursing a head injury that kept him out of practice but appears to now be full-go.

● Cam Phillips (WR #81) reunited with his XFL quarterback PJ Walker this week. The dynamic duo held the leagues most passing yards, receiving yards, receptions, and touchdown receptions. Their chemistry can aid Phillips in getting acclimated to the new offense.

● Marken Michel (WR #83) and Ishmael Hyman (WR #13) both saw their fair share of targets all week. Both offer solid speed and chunk-play ability that is nice to have from deep on a depth chart.

● Brandon Zylstra (WR #16) has emerged as one of Will Grier’s favorite targets over the past few weeks. They have shown stable timing and chemistry.

Defensive End:
● The team seems to be bringing in more players into the defensive end room and it could be because Marquis Haynes (DE #98) is in concussion protocol. Coach Rhule mentioned wanting to give Austin Larkin (DE #96) a chance to show what he can do for the team.

Linebacker
● Andre Smith (LB #57) made an excellent play on the ball to intercept Will Grier’s pass on Friday. However, he was was released by the Panthers this week.
● Veteran Tahir Whitehead (LB #52) had a veteran day off. It was an opportunity for some of the teams’ younger linebackers to get a shot at some snaps.
● Shaq Thompson’s (LB #54) groin injury has lingered and Coach Rhule hinted at a possible abductor issue that could take time to heal.
● Coach Rhule mentioned Smith and Jordan Kunaszyk (LB #43) explicitly as two players he would like to see more. Do not be surprised to see Kunaszyk get morereps in the coming week because of this.

● Joe Person reported on Saturday that the Panthers have been shopping for assistance in the defensive back room. It is somewhat troubling that the second corner job has gone unclaimed. The team could be looking to find something more stable at cornerback while the young guys develop.
● Eli Apple (CB #41) was listed as ”questionable” with a tight hamstring on Wednesday. Coach Rhule did not mention him with the other injured players when asked on Friday, though.

● Donte Jackson (CB #26) and Corn Elder (CB #29) had a solid showing in Practice on Friday as they intercepted one pass each.

Safety
● Jeremy Chinn (S/LB #21) continues to impress coaches with solid and safe contact in practice and good coverage against the teams’ receivers.
● Rookie Kenny Robinson (FS #27) was able to grab an interception in practice on Friday. Robinson is in a deep group of Safeties, so it has been challenging to stand out.

Special teams:
● Kaare Vedvik (K/P #8) continues to kick field goals and punt. Coach Rhule did comment on the idea of keeping an extra leg on the enlarged practice squad for insurance.

IMPORTANT DATES-
● Saturday, September 5th @ 4 pm:
○ Teams must cut their rosters down to 53 players.
■ Practice squad spots increased from 12 to 16
■ Teams may go into the game with a 55 man roster by calling up practice
squad players on game day.