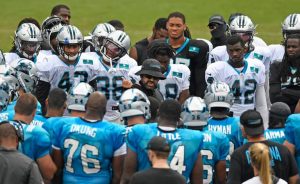 The 2020 Carolina Panthers training camp is one with many unique circumstances.

For the first time in franchise history, the Panthers training camp headquarters is not located at Wofford College in Spartanburg, South Carolina. Instead, it makes its Queen City debut at the confines of Bank of America Stadium and the Atrium Health Dome aka The Bubble. For the first time in NFL History, the Preseason schedule of games will not commence.

The circumstances are blatant as first-year Head Coach Matt Rhule takes the podium at team meetings, leading a vastly new coaching staff and players, all of whom are spread across a large open area, six feet apart. The team’s first game is less than a month away.

Here are the takeaways from the first week of Camp.