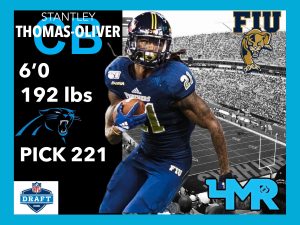 Stantley Thomas-Oliver III was the final pick in an all-defensive draft for the Panthers. Thomas-Oliver played wide receiver until his junior year of college, so he’s still a little raw and inexperienced at the position. However, you can definitely tell he’s a converted wide out based on his ball skills. In the 24 games of starting experience, he had 18 pass breakups and 2 interceptions.

Thomas-Oliver has the length that coaches look for in a corner. He has good route anticipation at times, which is a product of him playing receiver. On most NFL teams, a seventh round pick would have an uphill battle to make the 53-man roster. Thomas-Oliver, however, was drafted by a team that is rebuilding and very thin at corner. This is the best situation for him to be in, as he will likely be called upon early and often to make plays. He will likely be utilized in special teams, but with corner being extremely thin, he may have to start at some point at corner. There will be bumps in the road, but with proper coaching, Thomas-Oliver could be a valuable depth corner.

There’s no doubt that this historic defensive draft was exciting to see, but it remains to be seen how good these players will be on the field. It takes a solid two to three years to truly grade a draft class and see how each player transitioned into pro ball. On paper, this looks to be one of the best drafts for the Panthers in recent history. It will take awhile, but hopefully all of these players pan out and have a long career here in Carolina.