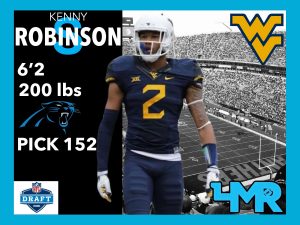 Kenny Robinson is an intriguing player with an interesting path to the NFL. Through his first two seasons, he was one of the best safeties in college, but he was dismissed from West Virginia University in 2019 for academic fraud. Robinson admits to having a classmate do the work while he attended a funeral and takes full responsibility. Prior to this incident, Robinson had a clean slate. He was set to enter the NCAA transfer portal, but decided to take a chance in the XFL, where he was drafted 39th overall. Robinson decided to enter the XFL because his mother was diagnosed with cancer.

In college, Robinson was a standout player who amassed 123 tackles and 7 interceptions in two seasons. He earned First-Team All-Big 12 honors after year two, and was destined to be an early round pick after year three. Robinson has all the traits you look for in a free safety. He’s a natural ball hawk with a winner’s mentality. Robinson has quick feet and oily hips like a corner. He can blitz, play deep, make plays in shallow areas and has really good coverage skills. He takes good angles in pursuit and has a near perfect tackling form. Robinson is probably the most physical safety in this draft class.

Robinson is a player with a lot of potential, who could become a starter within a season or two. He has the kind of athletic profile Matt Rhule is looking for and his playmaking comparisons are Earl Thomas and Justin Simmons, according to Pro Football Focus. One thing is for sure, he will get his opportunities in the Phil Snow defense this year. Snow often likes to use a three-safety look on defense and likes to rotate his players out to keep them fresh. Having another ball hawk/coverage safety for the defense not only makes the secondary better, but it helps the defensive line, as well. Robinson is one of the best value picks in the draft based on his experience and ability. Another solid pick for Hurney and Rhule. Check out this breakdown on Robinson here.