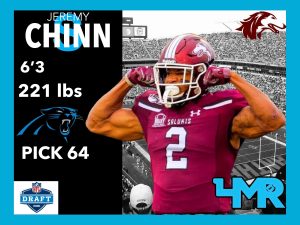 Chinn fits the athletic profile that Rhule looks for in his players. He’s the epitome of a position-less player, which is something Coach Rhule stressed that he was looking for. At Southern Illinois, Chinn played safety, nickel and linebacker, which shows his versatility. With the Panthers, he will likely play a variety of positions as well. It remains to be seen where he plays the majority of his snaps, but big nickel may be his niche in this defense.

Out of high school, Chinn wasn’t a highly recruited player. He got three scholarships from small schools, and he chose Southern Illinois. Chinn played four years for the Southern Illinois Salukis, where he amassed 243 tackles, 31 passes defended, 13 interceptions, 6 forced fumbles, 2 fumble recoveries and 1 sack. At the combine, Chinn ran a 4.45 40-yard dash, which tied for third amongst safeties and he had a 138 in the broad jump, which was first among safeties. With Chinn’s blend of speed, size and athletic ability, there’s little doubt that he will have a huge impact on this defense for years to come.

Chinn has solid man coverage ability and a relentless motor. He’s not afraid to tackle a player with full force and has excellent ball skills. Chinn has great closing and recovery speed. He takes good angles in pursuit of the ball carrier. Some fans have affectionally named him “Isaiah Simmons Light” because of his athleticism.

The Panthers traded up with Seattle to get Chinn, who was taken at pick 64. Marty Hurney said that he was worried Chinn may not make it to pick 69, so he needed to move up to get him. Chinn stated that he will never forget what Carolina did, and the Panthers would always get his very best. Side note: Chinn is the nephew of NFL Hall of Fame safety, Steve Atwater. For a more in depth breakdown of Chinn, click here.