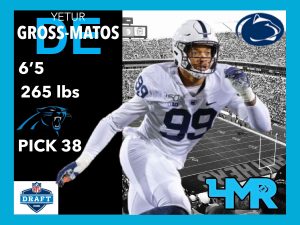 Gross-Matos certainly has all of the traits that teams look for, as he is 6’5 and 265 pounds. He’s another high motor guy, who is absolutely relentless while in pursuit. His pass rushing skills seem to have no limit, as he is able to get to the quarterback from nearly all alignments. Gross-Matos has a huge wingspan, so he has a large tackling radius. Also, he puts his traits to good use, as he is an excellent all-around tackler. He has an explosive first step and will win a lot of matchups on the edge.

Something that is being overlooked is his versatility. He has the ability to play both inside and outside on the defensive line. Not only is he a good pass rusher, he’s also a solid run stopper. He’s a pretty consistent player that has a high ceiling. The Panthers were so in love with Gross-Matos, they tried to trade back into the first round for him. The trade didn’t work out, but Gross-Matos slid to pick 38. Matt Rhule and Marty Hurney could not have been happier that Gross-Matos fell to 38 and they didn’t have to give up any assets to get him.

Gross-Matos dealt with tragedy at an early age, as he lost his father in a boating accident at two years old. His father was trying to save him, but drowned in doing so. A few years later, his brother was killed by a lightening strike. Gross-Matos uses these tragedies as motivation. He gained a lot of perspective for life and doesn’t take anything for granted. He’s going to seize this opportunity and make the best of it. Carolina has now given the defensive line a solid foundation with Burns, Short, Brown and Gross-Matos. This should be a fun front four to watch in 2020. For a more in-depth breakdown of Gross-Matos, click here.