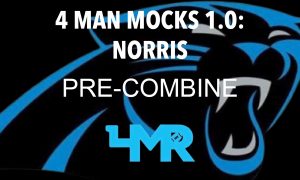 Over the course of the next few weeks, there will be a lot of visits from college prospects for the Carolina Panthers. This is the time of year where we get ramped up for the draft, so we will be doing some mock drafts based on information we are given about visits. This is a pre-combine mock draft, which is based on the little knowledge that we have at this point. Enjoy.

Round One: DL Derrick Brown

Derrick Brown was a five-star athlete out of high school and continued his stellar play in college. He amassed 31.5 tackles for a loss and 11.5 sacks in his last three years at Auburn. If you watch his tape, he has all of the things you look for in a player. He has the high motor and urgency in pass rush and is relentless in run defense. Carolina needs all of the run support they can get, as they allowed a whopping 143.5 yards per game (4th worst in the NFL). Brown has a variety of pass rush moves and uses them in the right situations. He has some of the most powerful hands in this draft and uses them to his advantage. He has incredible speed and flexibility for a big man. His play strength is amazing and he won’t be overpowered by many at the next level.

One thing we know about Matt Rhule is, he likes building the trenches first. He also likes highly athletic players and uses sports science to determine an athlete’s fit. Brown is an absolute stud and would be a day one impact player that fits Rhule’s athletic profile. Rhule also says he likes position-less players, meaning players that can play multiple positions and not pegged at just one. Brown has played every position on the line, from 0 tech to 5 tech. That’s exactly the type of player Rhule is looking for. He’s the perfect player to pair next to Kawann Short, especially since the team is unlikely to pick up Dontari Poe’s option. Brown is a leader on and off the field. Brown isn’t a sexy pick, but he’s a necessary one.

Even if Carolina somehow re-signs James Bradberry, they’re going to need another corner on the outside. Donte Jackson seems to be more suited as a slot corner. Dantzler is an athletic corner who would fit in a variety of schemes. He was considered a shut-down corner in the SEC and rarely gave up yards while in coverage. Dantzler has the length and speed that all coaches desire in their corners. He plays with a competitive edge and has great route anticipation. Dantzler had 5 interceptions in three years, but that’s mainly because quarterbacks didn’t throw his way often.

Dantzler’s versatility and athleticism make him a perfect candidate to be drafted by Matt Rhule. We don’t know much about Phil Snow’s defensive scheme, but we do know he needs another corner no matter what. Dantzler has a multi-scheme skill set that makes him the perfect piece for the Panthers’ defense. He may need to add a little weight to his tall frame, which is his only downside.

With Greg Van Roten possibly leaving the team via free agency, Carolina could be in the market for a new left guard. Hunt was a four-year starter in college and has experience at both tackle and guard. He’s a nasty run blocker and is pretty mobile for a guy his size. He has strong hands and overwhelming power. Hunt is an aggressive blocker who possesses traits to be an outstanding guard. Matt Rhule is a trenches guy who loves building teams from the inside out. Hunt has the athletic attributes and high football IQ that would be perfect for the Panthers’ offense.

It’s round four, and you’re seeing a pattern with this draft. Carolina has drafted defense and trenches, which is where they need the most help. This pick isn’t any different. With the Panthers only having Brian Burns, Christian Miller and Marquis Haynes under contract, they could use another edge defender in the mix. Robinson is a good run defender who has a variety of pass rushing moves. He has a high motor and is very explosive. He’s very versatile and can play 4-3 defensive end and 3-4 linebacker. Robinson needs to be a little more consistent, but he’s a good prospect to get in the fourth round.

Carolina is once again double dipping at defensive tackle with this pick. Elliott is good in run support and has potential to be a starter, with proper coaching. He’s inconsistent and has some mental lapses at times and needs to be coached up. However, he does have some upside. Elliott has a lot of room to grow, but he’s gotten progressively better over the years. With proper coaching, he could be a valuable rotational piece in Carolina’s defense.

Carolina needs a safety they can develop into a starter that can take over for Reid in the next season or two. Blackmon is an excellent tackler who also has good ball skills. He isn’t great in coverage right now, but he can be coached. Blackmon has decent play speed and is very competitive. He needs some work, but he has potential, which is all you can ask for with a sixth round pick.

For a seventh round pick, you’re just hoping for the best. Victor runs good routes and high points the ball. He has strong hands and good play speed. He’s not overly strong, but gives good effort when blocking. He could be a decent possession receiver with good length.

Thanks for taking the time to read these mocks. This will likely change each time based on combine results and team interest. Let us know what you think.