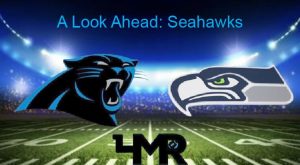 The Falcons just continue to have our number. Interim head coach, Perry Fewell, didn’t really have an answer for Atlanta once the team started turning the ball over. I don’t condone tanking or trying to lose, but it could be happening whether we like it or not. Where’s Cam when we need him? Oh, and where’s our defense when we need them? Here’s a look ahead to the Seahawks:

The Seahawks made a lot of changes to their roster in 2019, and they haven’t missed a beat. Mainly due to the play of Russell Wilson. They had a really solid draft and got some good talent this past offseason.

At this point, the team is in shambles and in rebuild mode. This doesn’t necessarily mean it’s going to be a full rebuild, but a reload of talent. This will be helped by the top ten draft pick that they’ll inevitably get next year. Currently, the team is projected as the 12th pick, however, it could be top ten based on the teams around them and their schedule. With the Panthers officially eliminated from the playoffs, it’s time to look ahead to the offseason.

Kyle Allen had another turnover happy day on Sunday. He left a lot of points on the field and missed a lot of open receivers. The protection has been pretty spotty, at best. On Sunday, Allen will face a Seattle pass defense that’s ranked 29th in the league. Allen will need a good game to beat the Seahawks. Look for Allen to hit a lot of short passes to Moore and Thomas to gain some confidence. Even though Allen isn’t particularly good at deep throws, look for Allen to try to get Samuel the ball on go routes. Samuel is almost always open on every route he runs throughout the games.

Christian McCaffrey had 22 touches for 135 total yards and no touchdowns, on Sunday. Carolina abandoned the run early, even when the game was still in reach. This is telling, as it seems like the team is giving CMC less touches now that the playoffs are off the table. Coach Fewell guaranteed another win this year, so I could see the team running McCaffrey early and often this Sunday. Seattle ranks 13th in run defense, so look for McCaffrey to be used a lot in the passing game. Also, look for Curtis Samuel to be used more in he running game as well.

DJ Moore continues his solid play, as he had 81 yards on Sunday. Look for Moore to run a lot of short ins and slant routes, as he is good at getting open on those. Samuel needs to be looked to in the passing game more, as he’s open more times than not. Moore might be leading the team, but Samuel is the most complete receiver that Carolina has. Ian Thomas has improved his blocking and will be used a lot this Sunday with Olsen likely still out with a concussion. Samuel will continue to run the same intermediate/longer routes where he wins, in hopes to get the ball in his hands.

There’s not much that can be said about the Panthers’ defense that fans don’t already know. The loss of Short was huge for the run defense and our pass rush. Hopefully Coach Fewell can motivate these guys to do their jobs. Play your gaps, cover your man, don’t get beat deep……

Russell Wilson has played well this year, and was in the running for MVP mid season until Lamar Jackson took off even more. If Carolina can somehow disrupt his rhythm, they might have a chance to win. The Panthers better not let him out of the pocket, as he’s still one of the best improvisers in the game.

Chris Carson is a solid running back who has 1,057 yards and 5 touchdowns on the year. He’s very elusive and can run both inside and outside. Seattle does a good job at blocking for him and they could have a big day if Carolina continues down their path.

Seattle has a really good receiving corps, as they have Tyler Lockett and rookie DJ Metcalf. They also have Josh Gordon, who they signed off waivers a few weeks ago, and he will be implemented in the game plan more today.

The Seahawks defense isn’t as stout as they have been in recent years. They’re 26th in total defense, 29th against the pass and 13th against the run. Seahawks could have trouble stopping the Panthers’ offense on the road. Look for them to pressure Allen to get him off his game.

• Pressure Wilson, but keep him in the pocket. Easier said than done.

• Win the time of possession battle. The offense needs to sustain long SCORING drives to keep the defense fresh and take the pressure off of them.

Seattle has a lot of injuries to key positions. The biggest loss is Jadeveon Clowney, who is a key pass rusher. Carolina will still be without Greg Olsen, as he continues to be in the concussion protocol.

This one is tough. We never want the Panthers to lose, but with the playoffs out of reach and the team in rebuild mode, it would be kind of nice for them to lose out for draft positioning. Perry Fewell got his first full week of preparation, as did offensive coordinator Scott Turner. As silly as this might sound, I predict Carolina winning this game, 27-24. This just seems like the kind of game Carolina will win.