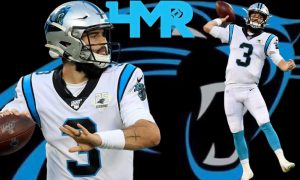 There are only three games left in the season and Kyle Allen has started all but two of them. With the Panthers officially eliminated from playoff contention, it’s time to put Allen on the bench and play Will Grier.

Kyle Allen has started 11 games, and has won five of them. Not singlehandedly, but the team has won nevertheless. Allen, basically a rookie, has had ups and downs throughout the season. He has a lot of deficiencies in his game, but he’s played decent enough (good at times, bad at times) to earn a spot as a backup, beyond 2019.

The reasoning behind giving Grier a chance is simple, you need to see what you have in the guy you chose in the third round. Marty Hurney told the media that he had Will Grier higher than Kyler Murray on their draft board. We already know Allen will have a spot on the roster in 2020, so why not give Grier a shot?

Playing Grier would also give other teams an idea of what Carolina has with him. If Grier goes out and plays well, the Panthers could use Grier as trade bait. The Patriots did that for Jimmy Garoppolo and got a second round pick from San Francisco. Not saying Grier is anywhere near the player that Jimmy G. is, but how would we know?

The team has said that they don’t want to ruin Kyle’s confidence by starting Grier, but at this point, it wouldn’t hurt. Interim head coach, Perry Fewell, recently said that Allen will start against Seattle, as he didn’t want to start a “quarterback controversy” right now. That’s kind of a lame excuse considering they’re both backups. How can you have a backup quarterback controversy? The team has also said that they have a young quarterback in Allen that needs to gain confidence in his position. Isn’t Grier also a young quarterback that could use some confidence?

Will Grier could be the quarterback of the future, too. Who knows? A lot of fans have been clamoring for Will to play for the last five or six weeks. Obviously the coaching staff has a reason for keeping him on the bench, but practice is a whole lot different than real game situations. Why not give the kid a shot in the last two or three games? You really don’t have anything to lose by playing him, but you have a whole lot to lose by wasting your third round pick.

Unless, of course, the team is trying to tank and they think Grier would win some games….The time is now to see what the kid has. It’s not likely that he could win any of the next three games anyway. What do you think, Panthers’ fans?