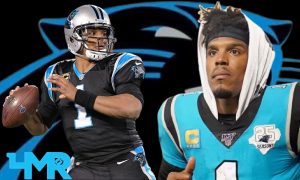 Ever since week two, the talking heads in the media have written him out of Carolina. On September 15th, Michael Vick gave his bold prediction on Fox NFL Sunday that Cam wouldn’t be with the Panthers in 2020. It hasn’t stopped since that day. Analysts will tell their audience that Cam is washed up in one breath, and in the next they’ll talk about how he can transform another team into a Super Bowl contender.

The most recent story is from Ian Rapoport, who said the Panthers are open to trading Cam, and they’re holding out for a big deal. Let’s not forget that Rapoport is the same guy who said “Antonio Brown to the Buffalo Bills is a done deal” and then Brown was traded to the Raiders. Rapoport has been wrong so many times and is really good at covering all bases. After all, the best media members are able to create storylines (to engage readers) and then cover themselves with all angles, so that they are able to maintain credibility.

Cam is one of the most polarizing individuals in the NFL and he’s a great talking point to get clicks and views. That’s the reason every analyst can’t keep his name out of their mouth. The only thing to be sure of when talking about the future of Cam in Carolina, is no one is sure about anything. There have been no decisions made. Nothing is set in stone.

Cam is set to have surgery this week on his foot to repair the lisfranc injury that put him out for the season. The very decision about Cam’s future, hinges on how healthy he can get. Let’s be clear…..Carolina wants to keep Cam. David Tepper and Marty Hurney know that it’s hard to find franchise quarterbacks. However, there are many variables that will go into their decision, but it’ll be a few months until anything can play out. So, trading him and keeping him are both on the table at this point.

Let’s try to make sense of things from a logical standpoint, shall we? First and foremost, if a team wants mega compensation for a player, it usually means the team doesn’t want to get rid of the player at all. They’re just covering all the bases. Another thing is, releasing Cam makes no sense because you get nothing for your franchise quarterback. You won’t be able to sign any player or players with his $18 million salary that will have the same impact on a game as Cam. Nor will you have any draft picks in exchange for Cam to select a new quarterback.

If Cam can’t get back to 100%, then the team would likely put him on the trading block, which would make the most sense if they’re trying to move on. However, a team isn’t going to give them a “big deal” if he’s at 80%. With surgery looming and no guarantees about his health at this point, it really makes no sense to do anything but keep him. A healthy Cam is the best option at quarterback at this point. Especially when you consider that his salary is low compared to half of the NFL quarterbacks’ salaries.

Other variables will also go into the Panthers’ decision about Cam’s future. For instance, does Cam even want to play here on a one year salary? That’s a huge risk for a player of Cam’s caliber. Newton’s agent may want to try to get an extension before he takes the field. No one knows. Another variable would be, what if Carolina continues losing and ends up with the chance to get their next franchise quarterback? Would they let Cam play out his contract and let the rookie sit?

The talking heads also fail to realize that the team doesn’t even have a head coach or really even a general manager. David Tepper fired Ron Rivera and is keeping Marty Hurney with a more limited role, as he will be the college talent evaluator and scouting consultant. Without a head coach or general manager, there’s no possible way to figure out what the future of Cam Newton looks like. It’s all talking points and speculation. If I’m a potential head coach, a healthy MVP quarterback is a huge selling point.

In my personal opinion, if Cam gets healthy, you have to keep him. You’re not going to find anyone as impactful as Cam with his salary. The team isn’t going to get that back breaking deal that they want. They likely won’t get anything higher than a third round pick, which is the same round comp pick they’d get if they kept Cam and let him go after next season. A healthy Cam is still really good, as fans saw in the first eight games of last year, when he was putting up better numbers than he was in 2015. The team is set to have quite a bit of salary cap this offseason, and there will be a lot of moves to create more cap room. So the team doesn’t necessarily need Cam’s cap savings. But no one knows what’s going to happen yet.

Bottom line is, stop listening to the media. They are there to make stories about things that aren’t really stories at all. Their job is to get as many clicks as possible, and right now, Cam is their main source of income. Currently, Cam Newton is a Carolina Panther. The best course of action for the fans is to let things play out. The Panthers are rebuilding, but that doesn’t mean it’s an overhaul. If Cam is healthy, it makes perfect sense to keep him around next year. If that’s the road they go, drafting a franchise left tackle in the first round is something they need to look into. Nobody can play quarterback for the Panthers behind that line, and Kyle Allen isn’t the answer. Now, can we let Cam heal up and give him the respect that he’s earned?