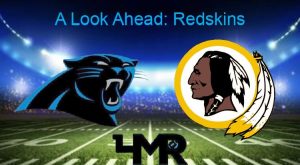 That was a hard fought game, but the Panthers came up short. Or should I say, they came up wide right. Kyle Allen had a good game, as he does in domes, and he put them in position to win. However, the defense looked lost at times and kicker Joey Slye left a few points on the field. Let’s move on from New Orleans. This is a look ahead to the Redskins:

The Redskins have struggled this year in nearly every area. They started rookie quarterback, Dwayne Haskins, last week and got their second win of the season. Washington had minimal roster turnover and had a decent draft. Wide receiver, Terry McLaurin, was a surprise breakout star. While the Redskins’ record isn’t great, it’s not a team that Carolina should take lightly.

The Panthers have put five starters on injured reserve this year. Dontari Poe and Greg Van Roten were placed on IR this week after both were hurt in the game against the Saints. That puts a huge hole in both the offensive and defensive lines. Neither of the lines have played well all year, but both players have been two of the most consistent on their side of the ball. Carolina could struggle to stop Darrius Guice and Adrian Peterson on Sunday, which isn’t really that different from every week. However, it’s important to keep the faith!

Kyle Allen played like an absolute stud on Sunday and went toe to toe with Drew Brees. It was his best game since week three against Arizona. Hopefully, he can have the same magic against the 11th ranked pass defense of the Redskins. Allen will look to his number one receiver DJ Moore, once again, to make plays and get yards after catch. Allen will look to get some short passes to gain some confidence early in the game.

Christian McCaffrey has been dominant this year, and Sunday was no exception. He had 133 total yards and 2 touchdowns, as the Panthers fell just short (or wide right) of the win. The Redskins have the 28th ranked rush defense, so it is imperative to get CMC going on the ground early. Carolina will likely use some misdirection plays on Sunday to keep the defense guessing. He should have a very big game against the Redskins.

DJ Moore is having a really good season and probably isn’t getting the recognition he deserves. He is currently fifth in receiving yardage with 905, and he’s on pace for 1,316 yards for the year. Curtis Samuel is having a somewhat disappointing year compared to the expectations that fans had for him coming out of training camp. Some of this is because Allen isn’t seeing him or he doesn’t have time to go through his progressions. Now, Carolina is using him more in the run game as an added wrinkle. Samuel is actually open a lot, but Allen rarely gets to look his way. Olsen is also getting open a lot, but Allen can’t find him either. Look for Carolina to run a lot of short ins and slants against this Redskin defense and let the receivers get yardage after the catch.

The Panthers’ defense hasn’t been the same since Kawann Short was placed on injured reserve on October 1st, as they haven’t been able to stop the run. The loss of Dontari Poe will be even more problematic for the defense, especially against the run. If the Panthers want to make a run, they’re going to have to step it up defensively, and the Redskins game is the perfect time to start. Washington has a rookie quarterback that has thrown 6 interceptions, had 3 fumbles and has been sacked 17 times in five games. Carolina will continue to give rookie, Brian Burns, more reps, as he seems to be over his wrist injury. The Panthers will look to pressure Haskins and cause him to make mistakes. They’ll need to focus on Adrian Peterson and Darrius Guice in the running game, and make Haskins beat them with his arm.

Dwayne Haskins hasn’t had a great start to his NFL career. It’s not all his fault, as he really has no help from his supporting cast. However, they’re coming off of their second win of the season and they’ll have a little confidence built up. If Carolina puts the heat on Haskins, he won’t be able to complete many passes, as he has only completed 32% of passes when pressured. The Redskin offensive line is ranked 30th in pass protection, so it could be a long day for the rookie quarterback.

Adrian Peterson has been one of the best running backs in the NFL for years. At age 34, he has 543 yards on the season and is averaging 4.1 yards per carry. He would have more yards if Washington didn’t give up on the running game every week due to being so far behind. Plus, he’s now sharing carries with Darrius Guice, who returned to action two weeks ago after being injured in week one. This could be a very good game for both backs, as Carolina has struggled to stop the run all year. If Washington’s defense can somehow stop Carolina, the Redskins will likely be able to run all over them.

Rookie, Terry McLaurin, has been a surprise at receiver for the Redskins. He was picked in the third round of the draft, and has played like a first rounder. He runs a 4.35 40 yard dash, so Jackson and Bradberry will have their hands full. He lines up all over the field, so he’s going to get some chances to make plays on Sunday. That’s if his quarterback can get him the ball.

The Washington defense is similar to Carolina, as they are both bad at stopping the run. McCaffrey should have a field day against this defense. The Washington pass defense is fourth in the league in interceptions, as they have 12 on the season. They have 29 sacks this year, which is good enough for 15th. With the way the Panthers’ offensive line has shuffled around this year, the Redskins’ defense could get a lot of pressure Sunday. Look for Washington to disguise a lot of coverages to confuse the young quarterback, Kyle Allen. It might be hard to get pressure with Ryan Kerrigan out, though.

• Get in Haskins’ face. He will make mistakes if pressured.

• Double team McLaurin. They really don’t have any other reliable receivers.

Washington comes to Charlotte without one of their best pass rushers and their second best wide receiver. Carolina will likely be without left tackle, Greg Little, once again. Another hit to the struggling offensive line.