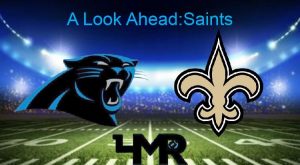 Never had a chance. Falcons have had our number over the last four years. Our defense finally figured out how to stop the run, but our pass defense stumbled. Kyle Allen’s turnovers killed drives and led to Atlanta points. This whole team crumbled. However, the Panthers still control their destiny, so Panther Nation needs to keep the faith. Moving on…..Here is a look ahead to the Saints:

The Saints had very little turnover from last year and remain one of the top teams in the NFL. Getting Erik McCoy at pick 48 was a steal, as he is a first round talent. Speaking of steals, the Saints drafted Chauncey Gardner-Johnson in the fourth round and he has played really well for them. He’s a player that most of Panther Nation wanted at pick 100 instead of Will Grier.

With Daley out on Sunday, Greg Little got the start at left tackle. He struggled most of the day, as he gave up 14 pressures and 2 sacks on the day. After being out 8 weeks for a concussion, it’s understandable. Brian Burns was on the field doing work, as he was the highest graded defensive player on Sunday. Problem is, he only played 16 snaps due to him still being in a cast. Tre Boston had his best game of the year, as he looked like the player we all hoped he’d be in his return.

Kyle Allen had another bad game, reminiscent of the 49ers debacle. Allen is young and will make mistakes. He looked completely shell-shocked on the field Sunday. The offensive line didn’t help, as they all looked bad. However, even in a clean pocket, Allen struggled to find open receivers. The turnovers were drive killers, especially the 2 interceptions in the red zone. The coaching staff will try to put Allen in a better spot this weekend against a red hot Saints team. They’ll look to get Kyle’s confidence up by utilizing McCaffrey and Olsen in the passing game early on some short passes. Moore will also continue to be his security blanket. Allen will need a perfect game to have a chance against the Saints. The offensive line needs to do their job up front. Everyone knows the key to success starts in the trenches. With Marshon Lattimore out, Allen needs to go after back-up Patrick Robinson.

Christian McCaffrey continues his stellar play (go vote for him to earn a trip to the pro bowl), as he had 70 rushing yards and 121 receiving yards. McCaffrey will again be used early and often in both the rushing and passing attacks. The Saints have the 3rd ranked rush defense, as they are only allowing an average of 85.3 yards per game. They haven’t played against McCaffrey this year, so get your popcorn ready. He will get going early in establishing the run. The only way to beat the Saints is to have a balanced offensive attack and make zero mistakes.

DJ Moore added 95 yards to his already impressive season. He’s currently on pace for 99 catches and 1,246 yards. He continues to be Kyle Allen’s security blanket each and every week. Curtis Samuel has taken a hit, with Moore becoming a number one receiver. Samuel is open on a high percentage of plays, but Allen has either panicked and tried to force it elsewhere before the play developed, or just didn’t even look his way. Look for a lot of short, quick routes so that Allen can (hopefully) get the ball out fast. It’s imperative that he do so, as the offensive line has had some struggles.

The Carolina defense played well against the run, but were absolutely blasted against the pass. Granted, without the costly turnovers, this game could’ve went a lot different. The Saints have one of the best quarterbacks in the league, along with one of the best running backs and the best wide receiver. Drew Brees gets the ball out extremely quick, so the likelihood of the defense sacking him isn’t great. Hopefully the secondary can get back to their good coverage this week and the line can get some coverage sacks. They have to keep an eye on Kamara, as he is heavily used in the passing game. It’s going to be tough, but it’s possible. Carolina will try to disguise some of their coverages, and put some pressure on Brees. They need to contain Kamara and knock Thomas off his routes. Easier said than done. Side note: In the last two games against the Panthers, Michael Thomas has a combined 12 catches for 78 yards. Bradberry needs to continue his elite covering of Thomas. New Orleans’ left guard is out, so Carolina should be able to get pressure through the middle of the line.

Drew Brees is one of the best. He rarely makes mistakes and gets the ball out quick. While age is catching up with Brees, he is still one of the most efficient quarterbacks in the league. Brees completes 50% of his passes while pressured, which is good for third in the NFL. In a clean pocket, he completes 82.3% of his passes, which is good enough for second in the NFL. He’s been really good at converting third downs in games he’s played. There’s not much you can do to knock him off of his game, but if Carolina can somehow contain Michael Thomas and Alvin Kamara, watch out.

Alvin Kamara is a dynamic running back who is used in the passing game. He will be heavily used, early and often. He could get a lot of yards on the ground if Carolina reverts back to its ways of not stopping the run. Latavius Murray gives the Saints another experienced back for a balanced rushing attack. Carolina will need to contain these two if they want to win.

Michael Thomas is the best wide receiver in the NFL. He’s on pace for 150 catches, 1,825 yards and 8 touchdowns. The Saints have Jared Cook at tight end, who has 3 touchdowns in his last four games. New Orleans does a good job at finding the open field in zone coverage, so that could give Carolina some problems.

The Saints’ defense has stepped it up this year, as they are the sixth in total defense. They only allow 318.3 yards per game. This will be a tough defense for Carolina to navigate through, so Allen better be ready. Cam Jordan is having quite a year, as he has 9.5 sacks and a monstrous 34 pressures this season. Jordan will be going against Taylor Moton, who has had a rough last couple weeks.

• Run the ball early and often. Get McCaffrey going. He’s a volume runner. Give him the ball.

• Get in Brees’ face. He’s still good under pressure, but every little bit helps.

• Neutralize Michael Thomas. Bradberry needs to continue winning this matchup as he did both games last year.

New Orleans takes a hit on both sides of the ball, as their left guard and star defensive back have been ruled out. Hopefully Carolina can take advantage of that. Greg Little will get the start, with Dennis Daley backing him up. Hopefully Little will be back in playing shape this week after missing eight weeks to a concussion. He returned last week but struggled.

The Saints are red hot this year. However, they’re not without their flaws. This will be a hard fought game between two division rivals. McCaffrey will have 215 total yards and 2 touchdowns, as he continues to dominate. DJ Moore will have 95 yards receiving. James Bradberry will limit Michael Thomas to 57 yards and no touchdowns, and have an interception. It’s very hard to play in New Orleans, but Carolina steals one this week, 31-30, as Joey Slye hits a game winning field goal.