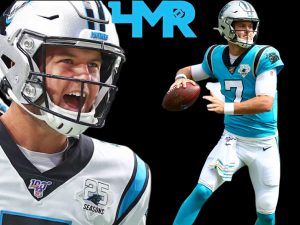 The Panthers have looked awful the past few weeks. The defense has been bad, the blocking has been spotty and the quarterback play has been less than average. Obviously there are a number of variables that go into wins and losses, but it all falls on number seven. After all, when the Panthers lost under Cam Newton, it was all his fault, according to a certain group of Panthers fans.

Allen has looked good at times, which is why he gained a fan club after his first win in Arizona. He made some throws in that game that made him appear as if he were a seasoned vet. The hot start literally divided an entire fan base, Cam fans versus Kyle fans. It was impossible for Carolina fans to just enjoy the wins. It always had to be Cam this and Kyle that. It remains to be seen if Kyle will be QB1 after this year, but here are three reasons he’s the answer, and three reasons he isn’t:

3 Reasons Allen is the Answer:

1. He’s young and still learning the offense.
Allen was an undrafted free agent when he landed into this spot. He wasn’t supposed to be here, but he is. At only 23 years old, he has learned an entire offense and is running it as best he can. His youth and inexperience will cause him to make mistakes along the way, but it’s important for him to grow within this offense and have growing pains now.

2. He doesn’t seem to let things bother him.
Allen has made his fair share of mistakes, as he has five fumbles lost and nine interceptions. That’s a lot. Especially when you consider that all nine interceptions came in a four game span. Again, he’s young. It happens to the best quarterbacks. When he makes these mistakes, he seems to brush it off and not let it bother him. Resiliency is huge in the NFL. You have to have a short memory, and apparently he has one.

3 Reasons Allen is not the Answer:

1. He is a turnover machine.
In eight games, Allen has 14 turnovers (5 lost fumbles and 9 interceptions). All 9 of those interceptions came in the last four games. When Allen gets pressured, he’s reckless with the ball. With every turnover, you can see the team become more deflated than a ball in New England on a Sunday afternoon. Turnovers directly affect the defense too. The defense doesn’t get enough rest when the offense turns the ball over, so they’re winded while on the field. Turnovers suck the wind out of the entire team.

2. He has terrible deep ball accuracy.
Prior to the Falcons game, Allen was completing 22.2% of his deep ball passes, which was bad enough to put him as the 32nd best NFL quarterback. When you have a speedster like Curtis Samuel, that’s terrible. He just can’t throw downfield. Even Cam with a bum shoulder had a better deep pass percentage last year (31.7%). He has to do better on those passes. Yes, the offensive line struggled at times, but even in a clean pocket his percentage is low (71.6%, 29th best in the league).

Keep in mind, Allen is definitely young and inexperienced. There’s a lot more football yet to be played, and it would be nice to see Allen grow each week. Once left tackle Dennis Daley gets back from injury, Allen’s blind side should once again be solid. Hopefully that will be soon, but who knows? One thing I do know is that we are stuck with Allen this season. Maybe he becomes starting quality, but maybe he doesn’t. He may not be Mr. Right, but he is Mr. Right Now.