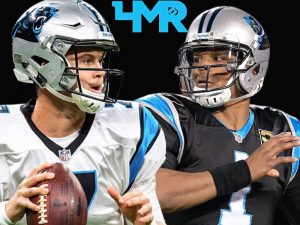 When Cam Newton went down with a foot injury in week 2, it seemed as though the Panthers were destined to be one of the league’s worst. In came Kyle Allen, who led the team to a 5-4 record, with a lot of help from Christian McCaffrey and the defense. While it has been fun winning, it also brought the Carolina fan base a new problem. It seemed like everyone wanted to have a Kyle versus Cam debate. Even analysts in sports media started comparing the two. 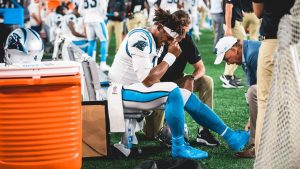 Spoiler alert: Kyle Allen is not Cam Newton….and that’s ok. There’s nothing wrong with that. Cam has been the Panthers’ franchise quarterback for nine years, so it’s easy to compare Allen to him. Which is unfair to not only Allen, but also Newton.

Allen has done well, all things considered. He’s certainly made the best of his opportunity, and seems to be improving each week. No, he isn’t perfect. Yes, he makes mistakes. The one thing you have to realize is, he’s basically a rookie. Not to mention, he’s trying to fill the shoes of the best quarterback in franchise history.

Comparing him to Cam is unfair, as they have a completely different skill set and they’re at different points in their respective careers. Allen is young and learning how to be a professional starter. He was an undrafted free agent who found a team to help mold him. He’s growing into his role and learning how to be a leader. He’s not doing the things that Cam does, but he’s doing what is asked.

Cam is a 30 year old former MVP, who is still a dynamic player when healthy. He was the number one pick in 2011 and burst onto the scene, breaking record after record. He’s led the Panthers to multiple division championships, as well as, a Super Bowl. Injuries have slowed him down the last two seasons. These things happen in the NFL. It doesn’t mean he’s injury prone. Thomas Davis tore his ACL three times, and he turned into one of the best linebackers that the Panthers ever had.

Allen and Newton are polar opposites, and they shouldn’t be compared. They both have their strengths, as well as their deficiencies. Cam is physically a freak of nature, Allen is a prototypical quarterback. Allen is more of a pocket passer, Cam can beat you with his legs and his arm. Allen has more touch on the intermediate throws, Cam has a rocket for an arm and rifles it to the receiver before the defense knows what hit them. Cam is more accurate on deep balls, Allen has better anticipation on intermediate routes. Allen isn’t going to kill anyone with his legs. He needs to improve a lot of his game. But he’s young. He will get there. It’s ok that they’re different. Allen is learning relatively quickly. 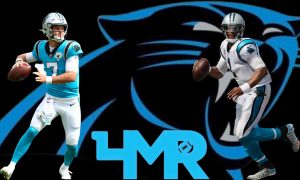 Cam could come back healthy and play again for the Panthers next season. However, we don’t need to worry about that. As a fan base, it’s important to enjoy the ride. We are, after all, Panthers fans. No matter your thoughts on who deserves to be the quarterback next year, let’s support the guy we have at the helm right now. What choice do any of us really have? So no, Kyle Allen is Cam Newton….but he’s making a name for himself. Let’s celebrate them both.