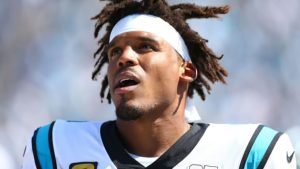 Is Cam Newton done in Carolina? This is a topic that has been discussed at nauseam for the past two months. When Cam was placed on injured reserve, it seemed to cause a media frenzy. Everyone with a computer seemed to type up an article about how Cam has played his last game as a Panther.

Truth is, how would anyone know? The Carolina front office doesn’t even know what will happen. Mainly because it is hinged on whether or not Newton can come back 100% healthy. A healthy Cam Newton is still dynamic in the Carolina offense, based on his stats prior to his injury last season.

Even Ian Rapoport has discussed, at length, the future of Cam Newton. He’s said on numerous occasions that Cam is likely done in Carolina and that he would be open to a trade. Ian Rapoport has been wrong before. Most recently, Rapoport said that Antonio Brown to the Bills was a done deal. He, and Adam Schefter, have both been wrong several times before. They’re in the media. It’s their job to take a lead and run with it. Sometimes they make stories even if the sources aren’t reliable. Bottom line is, they’re not always right, and things happen. Situations change. Cam could’ve been asked if he would be open to a trade if Carolina didn’t want him anymore. Of course he’s going to say yes. It’s all about context, and we don’t know exactly what was said.

Sources: The #Steelers are closing in on a deal to send star WR Antonio Brown to the Buffalo #Bills. There it is.

Marty Hurney, Ron Rivera and David Tepper have a lot to think about after this season. Luckily for them, the Panthers’ fan base isn’t involved in the decision making. Cam’s injury has some fans bashing him to no end. Some fans act as if they really can’t tell the difference between a diminishing player and an injured player. Some people act as if Cam has been bad his entire career. They act as if Cam has had an elite offensive line and tons of weapons at his disposal, but still failed the team.

Does it make sense to trade Cam Newton? Yes, it makes some sense. Does it make sense to keep him around? Absolutely. There’s an argument for both sides. On one hand, Cam is owed a lot of money and has been hurt for the past year and a half. Kyle Allen is 5-2 as a starter and seems to be getting better each week. The Panthers have a lot of players in the last year of their contracts and need to free some money to sign them.

On the other hand, it’s hard to find a franchise quarterback in the NFL. $19 million is low for a franchise quarterback, especially a former MVP. Kyle Allen, while he is winning games, is near the bottom in every meaningful stat for a quarterback. He’s far too young to tell whether or not he’s the heir apparent to Cam, but it doesn’t look like it right now. If Carolina traded Cam, would they get what a healthy Cam Newton is worth? What players could Carolina sign with the $19 million that would be as impactful as a healthy Cam? Carolina is slated to have around $43 million in cap space this offseason, which includes the rollover from this season. That’s enough to sign all of it’s core players with money left over. They really don’t need the salary from Cam’s contract.

Again, both sides have legitimate arguments. In my personal opinion, it makes zero sense to get rid of Newton. Franchise quarterbacks don’t grow on trees. The media have written Cam out of Carolina because he’s “done” but then in the same breath, they’ll say why he would take the Bears to another level. It makes no sense. Cam Newton has put his body on the line each and every week for the team and fans. We owe him a chance to come back and show that he still has what it takes to lead this team. Cam has saved Rivera’s job so many times, and Rivera hasn’t forgotten.

Even owner, David Tepper, made a comment in January, “If you told me that he took a year off and could recover… and it took an extra year, why wouldn’t you do that?” Tepper knows that Newton is a once in a generation talent and he’s a force when healthy. Tepper is a smart business man, and I think he can see how a dip in attendance is synonymous with a Cam-less team. I think Cam will take the rest of the year off to heal, and come back stronger and healthier than he’s been in three years. I think he will bet on himself and play out that last year of his contract so that he can get signed to another deal. Whether it be here or elsewhere. You can say a lot of things about Cam, but you can’t say he is a quitter. You can’t say that he isn’t competitive. He will not give up. So I think he will be back next year as a Panther. That’s my opinion with zero inside influence. 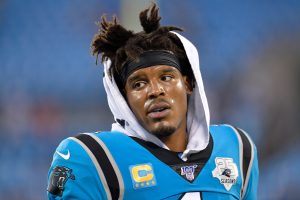 Bottom line is, no one knows what will happen. Cam might not ever be healthy again. This is something that fans need to think about. Prepare yourselves for the worst, but hope for the best. No one knows what will happen with Cam Newton yet, so let’s stop writing him off. As of now, he’s under contract. He’s a Panther. If he doesn’t come back, it’ll be hard for most fans, but we need to rally around Allen (or whoever Carolina might bring in) and support the team. It’ll probably be a mistake for the Panthers to get rid of Newton, but we will have to accept it. If he does come back, fans need to thank Allen for all his help and support Cam. We are Panthers’ fans until death. Let’s act like it. Cam isn’t done yet. Neither is Allen. Let’s stop worrying about things that we can’t control, and support the team, as well as, both quarterbacks. Get well soon, Cam. Let’s get some more wins, Kyle. Keep pounding, fellas.