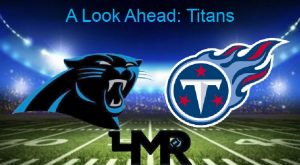 Ouch! That one didn’t feel good, did it Panther Nation? The 49ers are NOT who I thought they were. Then again, neither was the Carolina defense. They played so bad in so many different ways. I really thought this would be a defensive game and we’d come out on top, but nothing went right. The most concerning thing was, Carolina had two weeks to prepare. This one hurts. However, we can’t hurt too long. We have the Titans coming to Bank of America Stadium on Sunday. So, here’s a look ahead to the Tennessee Titans:

The Titans might have a .500 record, but don’t let that fool you. Their defense has played well this year, and Ryan Tannehill became the starter and has played well the last two weeks. The offense hasn’t been great, but they have really improved with Ryan Tannehill at quarterback. They also have a good running back in Derrick Henry. If Carolina doesn’t learn how to play the run, Henry could have a field day.

No one played well last Sunday. The entire team collapsed, including the coaches. Carolina got outplayed and out coached. The wide receivers ran lazy routes and lacked effort, the defense fell for the misdirections by the offense, Kyle Allen played his worst game as a pro, Norv Turner called predictable plays and Ron Rivera didn’t make enough defensive adjustments. Not taking anything away from San Francisco, because they are a really good team. The Panthers need to use this as motivation to whoop some Titan tail Sunday.

Kyle Allen gets the start once again, which shouldn’t shock anyone, as Cam Newton continues to rehab his foot injury. Carolina could’ve used Cam’s scrambling ability on Sunday, as the 49ers defense had Allen running for his life. However, Cam Newton wouldn’t have been able to win the game Sunday, because the entire team played bad. Kyle Allen made a lot of bad decisions and made some bad passes, but this loss wasn’t all his fault. Allen has a pretty short memory, so he likely won’t let last week’s loss affect him. Allen will likely utilize the short, quick passes and get the ball out quick. Dennis Daley struggled in pass protection, as did Trai Turner, as they were both playing hurt. Daley and the Panthers offensive line need to give Allen at least 3 seconds to throw the ball on Sunday. Hopefully, Allen studied a lot of film this week, as this Tennessee defense is deceptively good.

Christian McCaffrey was pretty much the only bright spot in the offense Sunday. McCaffrey showed why he is becoming the new face of the franchise. Look for him to, again, be used early and often. Something that Carolina couldn’t do last week is get going on the ground early. McCaffrey played in only 78% of the snaps Sunday, which was his lowest of the season. This Sunday, CMC will probably play 95-100% of the snaps and relied upon heavily. Tennessee has a pretty good defensive line, but McCaffrey should have success.

The Carolina receivers struggled mightily on Sunday. It was almost like they were still on vacation. Moore, Samuel and Wright need to give more effort and run better routes. They need to get separation, which they struggled with Sunday. Former Panther, Steve Smith, called the Carolina receivers out on Sunday. Look for Moore, Samuel and Wright to have a little more dog in them this weekend.

The Carolina defense continues to struggle against the run. Their gap discipline seems to be getting worse each week. The amount of mistakes made by this defense was embarrassing. Allen and the offense didn’t make things better with the turnovers, either. On Allen’s three turnovers, the 49ers were already in field goal range when they took over. Carolina will need to get to Tannehill consistently to throw him off of his game. The Titans offensive line hasn’t played particularly well this year, so the Panthers should have success in getting pressure. Carolina still leads the NFL in sacks per game, at 4.3. Luke and the defense will use last weeks game as motivation, so Tennessee better watch out. Also, look for Carolina to integrate Brian Burns into the lineup more, as he continues to work his way back from a wrist injury.

In the last two weeks, Ryan Tannehill has looked like the quarterback that Miami wanted him to be. He has 505 yards and 5 touchdowns in two weeks, and the Titans have won both games. He throws receivers open, makes good decisions, gets the ball out quick and makes accurate passes. The Titan’s offensive line is a little banged up, and rookie guard, Nate Davis, has struggled at times. Tennessee could have problems with the Carolina pass rush.

Derrick Henry has been less than stellar this year, but could be in line for a big day against Carolina. If Carolina can’t get more disciplined, Henry could have a hole or two from which to choose, on every run. The Titans could take a page out of the 49ers play book and use a lot of misdirection and screen passes to confuse the Carolina defense. The thing that has worked against Henry all year is, the horrendous play of the Tennessee offensive line.

The Titans don’t have any world beaters (thanks, Bruce Irvin) at receiver, but they are all very quick. Former Buc, Adam Humphries, killed Carolina last year and the Titans could use his skill set to beat them again. Corey Davis has had some success this year, as has Tajae Sharpe. They aren’t on pace for a lot of yards, but they also had a struggling Mariota at quarterback until two weeks ago. The Titans will try to use Carolina’s aggressive defensive scheme against them and use a lot of quick passes and screens. Tennessee also uses a lot of three tight end sets, led by Jonnu Smith, to keep the defense guessing. Smith has solidified himself as a solid target in Delanie Walker’s absence.

Tennessee’s defense is ranked ninth in the league, as they only allow 335.6 yards per game. Carolina’s offense averages the same amount of yards per game, which ranks a measly 23rd in the league. This defense has played well this year, and it seems like they’re getting better each week. Tennessee’s defense has only allowed their opponents to score points in 26.8% of their drives, which is 4th best in the league. The defense is like the 49ers, as they disguise and move players around right before the snap. They’re also multiple with their front looks, use multiple coverage concepts and blitz often. This is a stingy defense, and Carolina will have their work cut out for them.

• Run the ball early and often

Tennessee comes into the game with some injuries to key players. Jurrell Casey is a huge loss on the defensive line. They have potentially two offensive linemen out this week, as well as their star tight end. Carolina comes home pretty healthy as it’s just Cam and Greg Little who are injured. Mario Addison will be out due to his brother’s untimely death. We are all praying for comfort for you and your family, Mario.

Allen didn’t perform well when he faced adversity, so the Panthers would like to start fast and maintain their lead. The Tennessee defense is going to be tough to navigate through, but as long as the Carolina offensive line plays well, Allen should play well. In a clean pocket, Allen has completed 71.8% of his passes. When pressured, he has only completed 27.3% of his passes. That said, Allen will brush off the loss and the defense will pressure Tannehill consistently on Sunday. Carolina will sack Tannehill eight times and intercept him once, as Carolina wins the game at home, 30-17. #RevengeGame #4MR #KeepPounding