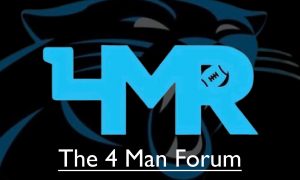 This week, we decided to take a few questions from some of our fans. Not sure if this will be a permanent weekly feature, but it’s something to get fans involved. We only received a few questions, so let’s start it off.

Do you think the offensive line will be able to handle San Francisco’s pass rush? – Thomas York III

The Carolina Panthers offensive line can handle the San Francisco 49ers defensive line IF…….they execute their blocks with lower pad levels. The 49ers play with high pads coming off the ball leaving their chest exposed. During trench warfare the ones who win with leverage aka lowest pads will be able to control the player in front of them. The last two opponents of the 49ers (Redskins & Rams) had great opening drive success running the ball down. If the Panthers OL can get lower pads and proper helmet placement while drive blocking then there will be huge running lanes for McCaffrey to take advantage of. – 4MR Kevin

With the emergence of Dennis Daley, what will the Panthers do when Greg Little comes back? – Jason Smith

This is a tricky question, since we have offensive line depth for the first time in forever. Little played well in limited snaps at left tackle but Daley has played well in consecutive games. No clue what they will do, but personally I think they should leave Daley in at left tackle. The concussions are concerning and Little shouldn’t be rushed back any time soon. Having seven quality offensive linemen on the roster is a good problem to have. Also, I included Tyler Larsen in the seven. It’s eight if you are part of the minority that considers Daryl Williams a quality lineman. – 4MR Norris

Should Alex Armah get the ball in short yardage situations? As great as CMC is, it’s clearly not his strength. –Matt Strand

I would say that’s not our offense’s strength as a whole. Our interior OL hasn’t played well and we don’t have the guys that can drive you off the ball and get movement to be effective in short yardage. Hopefully, that part of the offense improves with the return of Trai and Paradis getting back into form after his broken leg. Here are stats via Football Outsiders:

Adjusted line yards – 23rd..measures how many yards are created by the OL vs the RB. So the OL isn’t creating yards.

Power success – 30th shows that the OL isn’t getting movement on 3rd and 4th and short.

Stuffed % – 22nd shows CMC gets hit before he gets to the line of scrimmage more than your average RB. – 4MR Will

While Cam has been medically cleared to travel with the team, he will not be active. As far as pulling a struggling Kyle Allen, I just don’t see them benching him. The thing about Kyle is, he can make a mistake and then he shakes it off. He doesn’t let a bad play define his whole game. So, I really don’t see Carolina putting Grier in at any point unless Allen gets injured or we are up by 20 in the fourth quarter. – 4MR Norris

What does the Four Man Rush think SHOULD happen when Cam’s ready? Will Kyle Allen remain the starter if he’s still undefeated? – Matt Crinkley

Since this is the most talked about subject, we believe it requires multiple answers from the 4MR crew.

When Cam is healthy, the team will make the best business decision. In this case, you don’t leave the face of your franchise as well as 16 million dollars on the bench. Should Cam struggle or cost us games, Kyle Allen prepares in a way where he shouldn’t miss a beat if he were needed to come back on the field. – 4MR Lawrence

I personally think you have to ride the hot hand until Allen’s magic run comes to an end. Cam is obviously the franchise quarterback, and the team has a lot invested in him. However, I think this needs to be looked at as a week-by-week situation. I just don’t think you can yank a guy that keeps on winning. This also gives Cam time to completely heal and come back playing at a high level. All In all, this is a good problem to have. – 4MR Greg

I like Kyle Allen and think he’s done an admirable job at filling in. I’ve seen him get better each week and I’ve liked his confidence from day one. I do think that Cam deserves to start at some point this season, but only when he gets back to 100%. Cam has put his body on the line in every game he’s played and he’s earned the right to get his spot back. If he’s 100%, he gives Carolina an added weapon on offense that opposing defenses will have to account for. Cam played his most efficient season last year prior to his injury, and it was Norv Turner’s first year as offensive coordinator. If Cam struggles or gets hurt again, you know you have a capable backup. In my opinion, it’s no different than Bridgewater in New Orleans being undefeated, because you know Brees is getting his job back. It’s not a knock on Kyle Allen, but a healthy Cam is better than Kyle. That’s just my opinion. But, I don’t make the decisions and I’ll support whatever Ron does. I would understand if they decided to stick with Allen, but I don’t think that will be the case. -4MR Norris

Thanks for the questions and as always, Keep Pounding!