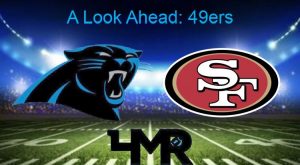 Who else is glad that the bye week is over? That was a brutal week without Panther football. It’s time for Carolina to march into San Francisco to play the undefeated 49ers. Kyle Allen looks to extend his winning streak to 6-0 for his career. Will he be able to withstand the Niners stout defense? Here’s a look ahead to the 49ers:

San Francisco has remained unbeaten through the first seven weeks, although they barely beat Washington last week. Granted, they played in really sloppy conditions. Their defense, led by Dee Ford and rookie, Nick Bosa, has dominated teams, as they only allow an average of 10.7 points per game. This defense will be a test for the Panthers, as this will be the hardest defense they’ve faced all season. Carolina will utilize McCaffrey in both the running game and passing game and try to keep the Niners defense guessing.

Ok, Kyle….We see you. This was Allen’s first game with no fumbles and he was looking more comfortable in the pocket. He still has some work to do, but he’s still a young quarterback making the most out of his opportunity. Allen is doing exactly what Carolina was hoping he’d do if Cam got hurt. The 49ers will be a huge test for Allen, who was named the starter on Monday since Cam Newton hasn’t started practicing yet (As Expected). San Francisco has one of the best defenses in the league right now. Make no mistake about it, their defense will be gunning for Allen. Hopefully the offensive line will continue to give him the time he needs to hit his open targets. Norv Turner will likely call a lot of quick passes and three step drops against this defense. He will probably enlist the help of Olsen and Manhertz for blocking as well.

Last week Christian McCaffrey was shut down on the ground, but that didn’t stop him from scoring twice. He will once again be a key part of this offense Sunday, as the 49ers allow an average of 90 yards rushing per game. The 49ers haven’t played a running back of McCaffrey’s caliber yet and it will be interesting to see how they handle him. Especially with this Panthers defense playing as well as they are. If this defensive unit continues its play and gives Allen and McCaffrey good field position, look for McCaffrey to handle the load and be productive. The 49ers seem to play with high pad levels, so McCaffrey should be able to have some success on the ground.

In London, DJ Moore, Curtis Samuel and Greg Olsen all had fairly productive games. Allen may have a little more trouble against this stout defense, but these three receivers plus McCaffrey will be his main targets when he throws. It’s likely that Moore will run a lot of shorter routes, since San Francisco will be pressuring Allen. Plus, he can get a lot of yards after the catch. McCaffrey will be getting a lot of work in the passing game as well. Also, look for Ian Thomas to be involved in more snaps this Sunday. Rivera said that the absence of Thomas was due to his injury putting him behind. Rumors have it, that the staff haven’t liked what they’ve seen in his blocking. Coach Rivera started in a press conference that Thomas has improved and has earned more reps.

Carolina’s defense has been playing at a high level for the past 4 games and looks to keep it going against San Francisco. The Carolina defense is second in the league in quarterback hits, with 50 (NE is first with 51), but Carolina has played one less game than the rest of the top six. That’s something that the Panthers need to continue against San Francisco, as Jimmy Garoppolo seems to struggle when being pressured. Garoppolo has thrown 6 interceptions, has been sacked 8 times and fumbled 5 times. In order for Carolina to win this game, the defense needs to cause Jimmy G to make some mistakes and cause some turnovers. The formula Carolina has used in the past four games is to dominate on defense and give Allen great field position.

Carolina also needs to limit San Francisco’s run game, as they are second in the league in rushing yards per game (172.7 per game). Carolina has struggled to stop the run this year, but hopefully they will learn to stop the run on the way to the quarterback. Carolina leads the league in sacks with 28 (in one less game than the top six) and they’re second in takeaways with 15. While both of San Francisco’s offensive tackles will likely be out again this week, the players filling in (Justin Skule and Daniel Brunskill) have done well. However, they haven’t played a defense like Carolina so far. Hopefully, Carolina has another 7 sack and 7 takeaway game and beat the Niners.

Jimmy Garoppolo is finally healthy for the 49ers and has the team undefeated through the first six games. He isn’t carrying the team, but he’s being a game manager. Much like Carolina, Garoppolo’s defense puts him and the offense in position to win. Having a good running game helps, but Garoppolo makes the necessary throws when he needs to. If he wants to take his team to 7-0, he will need to limit his mistakes against this opportunistic Carolina defense. While both offensive tackles have been out for consecutive weeks, the backups have played pretty well in their absence. They will have a test on Sunday, as they haven’t played a defense as dominant as Carolina.

San Francisco has a solid running back trio in Matt Breida, Tevin Coleman and Raheem Mostert. This will be a test for Carolina’s 23rd ranked rush defense. This is a very dynamic backfield that can be utilized in both the running and passing game. The 49ers rank second in rushing and will look to keep that going this Sunday.

The main target in San Francisco is tight end, George Kittle. Kittle leads the team with 376 receiving yards. The receiving room consists of Marquise Goodwin (181 yards), Deebo Samuel (168 yards), Kendrick Bourne (139 yards) and Richie James (108 yards). However, there’s a new guy in town, as the 49ers have traded for Emmanuel Sanders this week. Sanders will give the team a proven target that is sure to enhance the offense, if Garoppolo has time to throw. With any luck, Carolina will put more pressure on Garoppolo than he is used to.

The 49er defense is stout. They have five first rounders on the defensive line and they are playing lights out. This will be a tough test for Kyle Allen and the Panthers’ offensive line. The defense has 20 sacks and 35 quarterback pressures. Look for the defense to blitz at a higher rate to get Allen to make mistakes. The secondary of San Francisco is also one of the best in the league, but their pass rush is one of the main reasons they’ve been successful.

• Run McCaffrey early and often (as always). The 49ers rank 8th in rush defense, so he will have his work cut out for him. CMC is a volume runner, which means the more you give it to him, the better he gets.

• Protect Kyle Allen. The line needs to give Allen time to find his target. The San Francisco defensive line will be coming for him.

• Moore and company need to get separation. Continue to mix things up with Samuel in the run game.

• Pressure Garoppolo. He makes mistakes when he’s pressured and doesn’t like to leave the pocket. He rarely extends plays with his legs. Pressuring him will shake his confidence.

• Bradberry and the Panthers defense need to continue their solid play, as the 49ers are stacked with speedy receivers. The (likely) return of Donte Jackson will help with that.

• Defense needs to cause several turnovers to give Allen less field to work with. Playing against a stacked defense could make it hard on Allen and the offense, but good field position will make things easier.

• Protect the ball! If the 49ers defense sacks Allen, he needs to hold onto the ball. He did that last week, so hopefully he continues to get better.

Carolina should get Trai Turner and Donte Jackson back this week and it comes at a good time. Allen will need all the protection he can get in this game. Cam is still out this week, but he has been practicing on the side with trainers, as he continues the rehab process. Greg Little is still in concussion protocol, but is progressing nicely. The team will be bringing him along slowly since this is his second concussion this year. The emergence of sixth round pick, Dennis Daley, has eased the effects of losing the second round tackle.

This will be a tough match against an undefeated team, but in reality, the 49ers haven’t played anyone with a winning record. So, this will be a huge test for them, too. Essentially, these two teams are almost mirrored from each other. Dominating defense, good running game, game manager quarterback and solid offensive line. This will be a defensive battle (obviously) and will likely be a somewhat low scoring game. Carolina is currently averaging 27.7 points per game, but San Francisco is allowing 10.7 points per game. Norv Turner having two weeks to prepare makes a difference, as Carolina wins on the road, 24-17. Led by Christian McCaffrey and a great defensive effort, San Francisco is no longer unbeaten. #KeepPounding 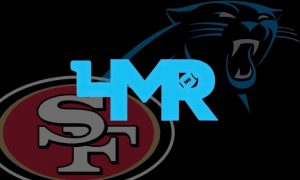