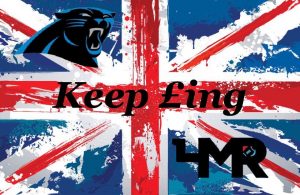 Welcome to the Christian McCaffrey Show. He’s the best running back in the league right now, if not the best overall player. With Allen in at quarterback, the offense runs through McCaffrey. What a performance by CMC, as he had 175 yards rushing, 61 yards receiving and 3 total touchdowns. Kyle Allen struggled with pocket presence and ball security once again, but he helped the team just enough to win. Allen is doing his job as a back up, but it will be a nice change when Newton comes back. Either way, both Allen and Newton need the fans’ support. Now, it’s off to London! Here is a look ahead to the Bucs:

Tampa comes to London with a record of 2-3, even though they’ve scored more points than anyone in the division. The Bucs have been up and down all year, as has Jameis Winston. One thing that has remained consistent for the Bucs is their run defense. Tampa Bay has only allowed 349 yards on the ground in five games, which is good enough for third in the league. The Bucs are capable of beating the Panthers, which is evident due to this happening in week two. One difference is, an injured Cam Newton was playing quarterback for Carolina. Linebacker, Shaq Barrett, is having a superb season so far, as he has 9 sacks, 3 forced fumbles and 1 interception so far.

Kyle Allen is doing his job as a backup quarterback, as he isn’t doing anything to lose the games. His fumbling is still an issue, as he had two more last Sunday. He needs to get better pocket presence, but that comes with time. This Sunday, in jolly ole London, Kyle will likely be throwing a lot more. Tampa Bay’s pass defense is ranked dead last, and Carolina would be wise to get Allen going. The offensive line played well last week with Dennis Daley at left tackle, so hopefully they can keep Suh and Barrett at bay and protect Allen.

Christian McCaffrey is having a historic season so far, as he leads the league in all purpose yards and is on pace to smash the record set by Chris Johnson in 2009. Whether or not he can keep it up, is yet to be seen. Look for Carolina to try to get him going early, even though Tampa’s rush defense ranks second in the league, and they only allowed CMC to get 37 yards in their last meeting. Hopefully, he can break a few long runs, as he’s done several times this season, to keep the defense honest. McCaffrey will be used heavily in the passing game due to the Buc’s porous pass defense. Look for Carolina to give Reggie Bonnafon a few carries on the heels of his successful game last week.

DJ Moore is on pace to have 1,100 yards receiving this year, and looks to capitalize on the Buc’s 32nd ranked pass defense. Moore seems to be coming into his own and is showing fans why he was a first round pick. He made a nice leaping catch last week, where he went up and plucked it out of the sky with ease for a 52 yard gain. Curtis Samuel will also get plenty of looks in the Carolina offense this Sunday. He was used in the running game for a couple of plays last week, but was relatively quiet. This was due to Christian McCaffrey’s amazing day. Greg Olsen was held without a catch last week, even though he was open on several plays. He gives Allen a big target in the red zone, and he will be used this Sunday in London.

The Carolina defense had a few hiccups Sunday, as they allowed Gardner Minshew to throw for 375 yards. With Donte Jackson likely returning to the lineup, that will help tremendously in coverage. They will have a huge test again Sunday, as Mike Evans and Chris Godwin will get a lot of looks. This is a revenge game for the team and they’ll be looking to stop Chris Godwin this time around. With Tampa’s right tackle and right guard likely out with injury, Carolina should get good pressure and keep Winston on his back. I’d be remiss if I didn’t mention defensive lineman, Efe Obada, who heads back home to London. Expect to see more of him this Sunday, so he can play in front of his home crowd, which should give him more motivation. #Keep£ing

Jameis Winston is having a relatively good season, as he has 1,371 yards, 11 touchdowns and 5 interceptions. That’s good enough for a 97.2 QB Rating. That’s a little misleading, considering that in the last 4 games he hasn’t had less than a 103.4. Winston has developed a rapport with wide receiver Chris Godwin, and it has translated to the field. In week two, Winston had 208 yards and a touchdown against Carolina. Carolina has a very different defense than they did in week two. Look for Winston to struggle against Carolina’s pass rush. Especially on the right side, as both his right guard and right tackle are expected to miss the game.

In the week two battle, Peyton Barber has 82 yards rushing and 1 touchdown. Barber will look to have an even more successful day against a Panthers defense that ranks 24th against the run. If Carolina doesn’t get their run defense in check, Barber could have a field day.

The Buccaneer defense has been excellent against the run all year. In week two, they held Christian McCaffrey to 37 yards rushing. It’s going to be hard to do that the second time, now that CMC is in the zone. Their pass defense isn’t good, as they rank last in the NFL. They’ll look to hold McCaffrey in check and make Kyle Allen beat them with his arm. Shaq Barrett is playing out of his mind this year. Carolina will have their hands full once again Sunday, although their offensive line seems to be getting better each week, no matter who’s playing. Dennis Daley stepped in at left tackle and played well.

• Scheme ways to get McCaffrey the ball. The offense runs through CMC and he will be needed on Sunday. Get him the ball early and often.

• Protect Kyle Allen. Sixth round pick, Dennis Daley, stepped in and played well at left tackle while Greg Little is injured. Hopefully, Allen can become a little more comfortable and learn to step into the pocket.

• Protect the ball. No matter who it is, hold that ball tight. No fumbles this week.

• Rush the passer. Carolina needs to get pressure on Winston while not letting him get out of the pocket. Winston is dangerous when scrambling.

• Contain Peyton Barber. Carolina needs to learn how to stop the run.

• Get Greg Olsen going against this porous Bucs’ defense. 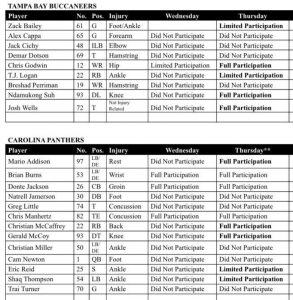 Both teams come into this game with key injuries, but perhaps the worst injuries are to the Buccaneers offensive line. They’re not as prepared for offensive line injuries as the Panthers are (sounds weird for Carolina to have offensive line depth). Carolina gets Donte Jackson back, and it comes at a good time. Hopefully, Shaq Thompson and Eric Reid are ready to go Sunday. All signs point to them playing.

Coach Rivera said that he’s keeping the schedule as normal as possible for Friday and Saturday, so the players can have some continuity in their routine. This will prove to be beneficial, as the players will be well rested and ready to go. This will be a tough game for both teams, but Carolina will find success through the air. Carolina wins on the road, yet again, 27-24. Carolina goes into the bye week with a record of 4-2. #Keep£ing 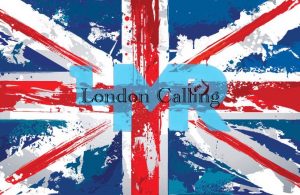