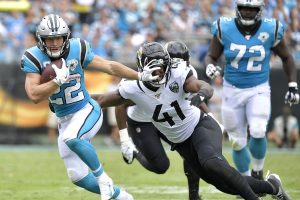 There are quite a few people out there that think Panthers’ running back, Christian McCaffrey, deserves to be in the conversation for NFL MVP. On one hand, it’s only week six and it’s a little early for that talk. On the other hand, it is fun to think about. After all, there really aren’t many positive things to think about this season, aside from the defense and McCaffrey. Yes, Kyle Allen is doing decent at quarterback, but everyone knows Cam will be back soon.

Back to the topic at hand. Christian McCaffrey is having a really good start to the season, with the exception of the Tampa Bay game. In five weeks, CMC is leading the league in all-purpose yards by over 120. He is currently on pace for 1,878 yards rushing, 893 yards receiving and 22 total touchdowns. That’s a pretty solid stat line for any running back, but is it MVP worthy?

Speaking of wins, that’s another thing that the league looks at when deciding who deserves the MVP award. Since 2004, of all the teams who had MVPs, their respective records have been at least 12-4. There have been two exceptions, as Matt Ryan’s Falcons won 11 games and Adrian Peterson’s Vikings won 10 games. Bottom line is, every team in the last 20 years that has the MVP, has made the playoffs. With Carolina sitting at 3-2, it’s hard to tell how their record will fall. It’s still early in the season, but the defense and CMC look like they can keep it going, at least until Cam is able to come back and take some pressure off of McCaffrey.

When Adrian Peterson won the MVP award in 2012, he had over 2,000 yards rushing. In the last 20 years, four running backs have won the MVP award. Of those four, they all had either over 2,000 total yards from scrimmage, or 25+ touchdowns. Given McCaffrey’s current pace, it’s not outside the realm of possibility for McCaffrey to have over 2,500 yards from scrimmage. He could also have over 25 total touchdowns, given he has a penchant for getting multiple touchdown games. 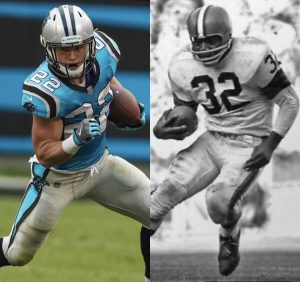 Christian McCaffrey is one of the most exciting players in the NFL and he’s really fun to watch. There’s little doubt that he will be in the MVP race for the rest of the year, given the pace at which he plays. As a matter of fact, if voting were done today, he should be the odds all favorite to win. The guy exemplifies hard work on and off the field. If CMC keeps this going, it’ll be a historic season for him and the Panthers. With any luck, Carolina will keep pumping out wins while McCaffrey puts the team on his back. Again, it’s far too early to name the MVP, but McCaffrey has been great through the first five weeks. He’s earned the right to be in the conversation. So until it’s time to vote, enjoy the greatness…..because you could be watching history in the making.