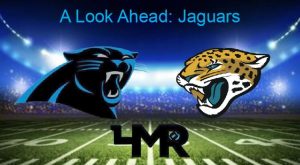 Despite the severe fumblitis by quarterback Kyle Allen, Carolina pulls off their second win of the season. The stout defense of the Panthers carried the team, as they sacked Deshaun Watson six times, intercepted him once, forced a fumble with a recovery and held him to 160 yards passing. Christian McCaffrey had another solid game, as he had 93 yards rushing and 86 yards receiving and one touchdown. Hopefully, the defense keeps this train going and they put a halt to all of this Minshew mania. Here’s a look ahead to the Jaguars:

The “Mississippi Mustache” is coming to town and he’s bringing a nation of fans with him. The Jags have a 2-2 record and are in a four-way tie for the AFC South division lead. The Jags are averaging 23 points per game over the last two weeks, both of which they won. Rookie quarterback, Gardner Minshew, has exceeded expectations for the Jaguars and will look to continue against Carolina. Leonard Fournette will look to feast upon Carolina’s 24th ranked rushing defense.

Ok, Kyle….hold onto the ball. Allen did decent as a game manager last week, but he needs to improve his pocket awareness. On two of his lost fumbles, the offensive line did well at pushing the defenders past the pocket, but Allen refused to step into the pocket. With Greg Little starting at left tackle and Daryl Williams playing right guard, the Panthers offensive line looked much improved. Greg Little graded out at 89.5 (per Pro Football Focus) in pass blocking and didn’t allow a single pressure in his first NFL start. That’s great, considering that Carolina had the worst pass blocking team in the NFL prior to last week. Allen will look to improve his ball security and pocket awareness this week at home against the Jags. It will be a tough task against Calais Campbell, who has played lights out this year. Allen will get pressured, so he better shore up that fumblitis. All we can ask is for him to win a couple more games against a weaker stretch of our schedule until Cam Newton comes back.

Christian McCaffrey continues his possible MVP season. He is getting more touches and making the most of them. He is putting the team on his back and being one of the main factors for Carolina’s success. Not only does he lead the league in rushing yards, but he also leads the league in total yards from scrimmage by 105 yards. However, he played 100% of the snaps last week (he touched the ball 37 out of 62 snaps) and it’s concerning that he will be worn down towards the end of the season. Carolina needs to involve Reggie Bonnafon and Jordan Scarlett more this week, especially if the Panthers take an early lead. Yes, McCaffrey wants those touches, but sometimes the coaches have to look long term and save players from themselves (see Newton, Cam).

One thing that Allen does well, is evenly distribute the ball. DJ Moore (261 yards, 1 TD) and Curtis Samuel (208 yards, 1 TD) are almost even through 4 games in terms of yardage and touchdowns. Greg Olsen, who is seventh in yardage among tight ends, has 226 yards and 2 touchdowns. If the offensive line can hold, Kyle Allen will look to get back on track and distribute the ball amongst his weapons. Obviously, Christian McCaffrey will continue to be heavily targeted in the passing game as well. While he doesn’t get talked about much, Jarius Wright deserves some praise. Wright had five catches for 59 yards against Houston. He continues to come through when the team needs him. Wright is a valuable part of this offense and will be looked upon again this week.

Carolina has the number one pass defense in the league, as they’ve allowed only 156.8 yards per game through the air. That’s 25 yards less than the second place, New England. Thieves Avenue is back, but this time, there’s a new number 24 leading the way. James Bradberry is having a career year and is proving to be one of the best young corners in the league. Donte Jackson, who was out last week, had two interceptions against the Cardinals and should be back this week against Jacksonville.

Carolina also has 14 sacks in two games and 18 so far this year, which is tied for first with New England. This feat was accomplished without Kawann Short, which is amazing in itself. The one thing that this defense needs to improve on, is the run defense. They’re 24th against the run, and with Leonard Fournette coming to town, they need to find a way to improve. A lot of this could be attributed to the scheme change. Carolina will look to hold Fournette to under 100 yards this week. One way to do that is to keep the defense off the field, so that they remain fresh. Kyle Allen and the offense needs to sustain long drives. Also, Mario Addison and Shaq Thompson are playing out of their minds. Brian Burns will look to continue his impressive rookie season. Carolina’s defensive front needs to put pressure on the right side of Jacksonville’s offensive line to disrupt Minshew. Carolina has been solid getting pressure on the quarterbacks, as they have 45 pressures on the season.

Gardner Minshew has taken the world by storm, with his outlandish outfits, long hair and swag (sound familiar?). Minshew has 905 yards, 7 touchdowns and 1 interception through four games, which is good enough for a quarterback rating of 106.9. He’s a rookie, so he makes some mistakes. He’s held onto the ball too long and took some sacks. He’s missed some deep routes when under pressure. He’s had open receivers and picked the wrong read. That said, the guy is more polished than any other rookie quarterback right now, and will get his chance to shine this week if he can pick apart the number one pass defense. Minshew will see pressure early and often, so it remains to be seen how he handles it. One more thing to watch: of the 77 points that the offense has scored with Minshew at the helm, 48 of those points (62%) have been in the second half.

Leonard Fournette is having a really good start to his season, as he is third in both rushing yards and total yards from scrimmage. It should be noted, however, that 225 of those rushing yards came last week. Fournette could have another big game this week against a weak run defense.

Jacksonville has a nice core group of receivers. Chris Conley, DJ Chark and speedster Dede Westbrook are a well rounded group, although it looks as if Chark is Minshew’s number one guy. After seeing Houston’s near success on a couple of missed deep passes last week, look for Minshew to try to go deep a few times. The Carolina defense is first against the pass, so it will be a task. Especially if Donte Jackson comes back this week.

Jacksonville’s defense is ranked 18th in total defense, 23rd against the pass and 13th against the run. They have a pretty good pass rush, as they are tied for sixth in sacks with 13. They are also tied for second in quarterback pressures with 53.

• Protect Kyle Allen. Carolina’s offensive line will get a huge test this week. With Greg Little likely out with another concussion, it may be difficult to hold off the Jacksonville pass rush.
• Get McCaffrey the ball. While it’s not sustainable for CMC to get 35-40 touches per game, it’s imperative to get him the ball that much while Cam is out.
• Defense! Defense! The defense needs to get to Minshew and force him to make mistakes.
• Protect the ball! The ball is your baby. Don’t drop your baby.
• Run defense needs to contain Leonard Fournette, no matter how tough it is. 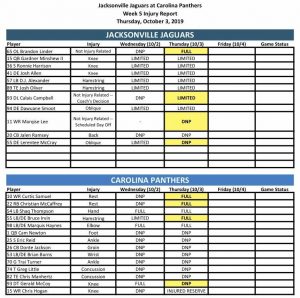 For the Jaguars, the only impact player that isn’t expected to play is, corner Jalen Ramsey. The Panthers, however, have a lot of impact players that could potentially be out. With Greg Little and Trai Turner likely being out, the offensive line will shift again. Williams will likely be back at left tackle, with Dennis Daley playing right guard. Hopefully something positive happens with Donte Jackson, as it would nice to have him back. Ross Cockrell will fill in again if Jackson can’t go. With any luck, this injury report will shrink significantly by Sunday.

First and foremost, I predict that there will be a lot of cheers and tears when the four new members of the Hall of Honor give their speeches. This will be a defensive battle with some success on the ground by both teams. Ultimately, the Panthers’ defense stymies the Jaguars and Carolina wins 21-17.