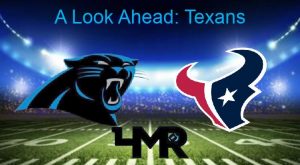 The first win of the season! Man, it feels good! Kyle Allen is slinging touchdowns left and right, McCaffrey is still doing McCaffrey things and the defense looked like they’re starting to come together. Brian Burns looks like the stud that Carolina wanted him to be. However, Arizona was a bad team, so fans should temper expectations just a bit. Carolina is visiting Houston, who will be stiffer competition for Allen and co. Here’s a look ahead to Houston:

Houston has a 2-1 record and are atop of the AFC South Division. They haven’t been overly dominating in their wins, but they have a good quarterback and defense, so they’ll be a tough test. Deshaun Watson is having a decent season, despite a less than stellar offensive line. The Texans still hasn’t gotten their running game going, but they’ll still try to establish a run game early this Sunday. The Houston defense ranks 21st in total defense, 23rd against the pass and 15th against the run.

Mr. No Panic, Kyle Allen, will get another start this week while Cam takes his time getting healthy. Allen looked really good against the Cardinals last week, as he had 261 yards and 4 touchdowns. If he gets 2 or more touchdowns and 0 interceptions this week against Houston, he will be the only player in the Super Bowl Era to ever have 2+ touchdowns and no interceptions in their first three NFL starts. Not shabby for a guy that had people questioning whether he was a legitimate backup in the league. Houston will be a much bigger test than Arizona, whose defense was ranked 31st prior to the game last week. Allen will have to get the ball out quick with a makeshift offensive line, as Trai Turner has been ruled out. Daryl Williams filled in well last week when Turner left the game. Greg Little was put in at left tackle and played well. Hopefully, this offensive line continues to get better.

Christian McCaffrey does what he does, week in and week out. Last week, he had 158 yards on the ground and 35 yards receiving, against a bad Arizona defense. Carolina will continue to feed him the ball early and often. Getting CMC going will help the entire offense and take pressure off of Allen, not that Allen feels pressure.

Allen distributed the ball around pretty evenly last week, as Samuel, Moore and Olsen all had touchdowns. Moore had the best touchdown, as Allen hit him on a crossing route and he took it 52 yards to the house. Look for a lot of shorter routes so that Allen can get the ball to them quick. All three should be looked for often today, and hopefully Turner has a good game plan.

The defense has gotten better each week. Against Arizona, they contained Murray more times than not, had 8 sacks and 2 interceptions. Brian Burns is looking like a star, as he is on his way to claiming the defensive player of the year. His quickness off the edge is almost unstoppable. The defense gets a healthy Bruce Irvin in the lineup for the first time this week, and hopefully it doesn’t take time away from Burns. The defense will have another tough test this week against Deshaun Watson, and they’ll have to keep him from scrambling. Watson is one of the best young quarterbacks in the league, so they’ll also have to account for his weapons. Hopefully Bradberry is up to the task. He’s played like a top 3 corner so far this season. With any luck, Donte Jackson will be healthy enough to start, as he will need to go step for step with speedster, Kenny Stills. Panthers’ pass rush needs a huge day as well.

Watson is becoming an elite passer and has scrambling abilities that makes him dangerous on any given play. Watson has some weapons at his disposal, as he has one of the best wide outs in the league in DeAndre Hopkins. He also seems to have a good rapport with speedster Kenny Stills. Watson will look to go after whoever plays for Donte Jackson, if he can’t go.

Carlos Hyde didn’t do well last week, but he had looked decent in the two games prior. Carolina’s run defense improved a bit last week against David Johnson, but they’re still 25th against the run. Texans will look to get Hyde, and maybe Duke Johnson, going early.

DeAndre Hopkins is one of the best receivers in the game. He has a test ahead of him, as he is going against James Bradberry. Hopkins may switch sides to exploit a matchup if Jackson is out. (It has been announced that Jackson is OUT) Kenny Stills will be a tough matchup for anyone.

Houston defense will have their hands full against McCaffrey, Samuel, Moore and Olsen. The key to their success hinges on their ability to rush the passer. Kyle Allen could see a lot of pressure today, as JJ Watt and Co. will be after him all day. Carolina’s offensive line has a tough test ahead of them.

• Run, run and run some more. No matter if it’s CMC, Bonnafon or Scarlett.

• Protect Kyle Allen. The line needs to give Allen time to find his target.

• Allen needs to continue his quick decision making and find the open receivers.

• Moore and company need to get separation. 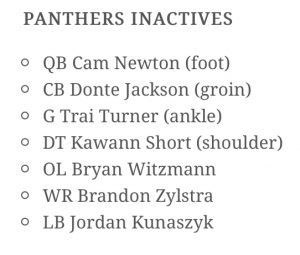 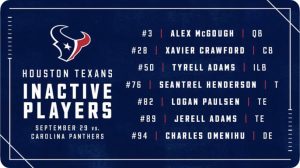 Houston comes into this game about as healthy as you can get. Their starters seem to be ready to go. Carolina isn’t as lucky. The Panthers have four starters out this week, two on offense and two on defense. Houston will try and take advantage of Jackson being out, as he is the only player capable of keeping up with Kenny Stills.

This will be a tough test for both teams, but especially for Kyle Allen. Houston’s defense is faster and stronger than he’s use to. However, Carolina has too many weapons for them to cover. The Panthers will win again, on the road, 27-24