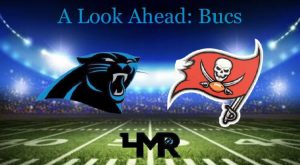 Week one didn’t go as planned, but that’s in the past. Some fans have their hands poised on the panic button, but please relax. It’s week two and Carolina has a fairly favorable schedule for the next two weeks, as they play Tampa Bay in week two and Arizona in week three. Here’s a look ahead to the Buccaneers:

The Bucs didn’t have a whole lot of major turnaround this offseason, which is surprising considering they went 5-11 in 2018. On offense, they traded their deep threat, Desean Jackson, so they aren’t as explosive. The Bucs defense was near the bottom of the league last year in every category, and seems to have only gotten worse. Jameis Winston threw three interceptions in week one, and also fumbled twice. He looks to improve his play in week two against Carolina. Bucs’ running back Ronald Jones finally looked like the player they thought he’d be, as he gained 75 yards on 13 carries (5.8 AVG YPC).

Although Carolina didn’t start fast and win week one, there was a lot to like about their performance. There was also a lot to work on. Cam was a little more limited in the running game than fans hoped, due to the coaches wanting to make sure his foot is healed completely. Cam’s throws looked sharp and accurate at the beginning of the game, but it got worse as it went on. He completed 80% of passes 1-10, 70% of passes 11-20, 60% of passes 21-30 and 50% on his last eight passes. This is the product of shoulder surgery and not getting a lot of reps in the preseason. However, it’s still something to watch moving forward. The Carolina defense looked promising at times, too. They will only get better. The emergence of James Bradberry and Shaq Thompson was nice to see.

Against the Rams, Cam looked sharp at times, but as the game went on, his arm appeared to become more fatigued. This will get better with more reps. He should play well against Tampa. McCaffrey picked up where he left off in 2018 and had 128 rushing yards and 81 yards receiving. Carolina needs to pound the ball early and often to wear out Tampa’s defense.

Jameis Winston needs to protect the ball if he wants to pull off the upset. Winston has talent and potential, so he will be the focus for the Carolina defense. Ronald Jones and Peyton Barber will be heavily used on Thursday. Receiver, Mike Evans, had an off day in week one, he will look to improve.

In 2018, Cam had the second best completion percentage when using playaction. Carolina didn’t use it too much against the Rams, but they should use it more often. The offensive line protected Cam fairly well on Sunday, and they should only get better. Look for Cam to throw a couple of downfield passes to shut the critics up. The shorter passes were game-planned against the Rams so that Aaron Donald didn’t have time to get to him. Newton will likely run more too, since his foot injury is getting fully healed. The Bucs defense ranked 3rd against the pass, as they allowed only 158 yards through the air. Granted, they played the San Francisco 49ers. Newton should dominate, if all goes according to plan. Against LA, they only converted five of eleven on third down, so if Carolina wants to win, they’ll have to do better. In Cam’s career against Tampa, he has a quarterback rating of 92.8. He’s also scored 29 touchdowns against the Bucs, which is his lost against any opponent.

Christian McCaffrey will build on his week one performance. He will likely get 18-23 carries and will continue to be utilized in the passing game. Hopefully, Carolina will have a commanding lead, and fans get to see Jordan Scarlett in real action. The Bucs allowed 98 yards on the ground in week one, which was ranked 14th in the league. The Carolina running backs should have a pretty good day.

DJ Moore had a good day against the Rams Sunday, except for the fumble. While the fumbles are concerning, let’s not forget another dynamic wide receiver who fumbled a lot in his first two seasons. Steve Smith fumbled eighteen times in his first two seasons, as a receiver and returner. Not saying that Moore is the next Smitty, but people need to stop panicking about the fumbles. Carolina has a lot of speed at receiver, so they will look to punish Tampa’s secondary. Having Greg Olsen healthy again is a plus too. With Tampa’s lack of pass rush and iffy secondary, Carolina should flourish in the passing game.

Carolina’s defense wasn’t able to contain the ground game on Sunday, which is something that will need to be corrected this week. It will help that Carolina faces Peyton Barber and Ronald Jones. The Panthers did a sufficient job keeping Goff at bay. The Carolina defense will look to feast on Bucs’ quarterback, Jameis Winston, who threw three interceptions last week. If Carolina wants to win this game, they need to pressure Winston more than they did Goff. With Irvin out, look for Brian Burns to get even more playing time.

Last season, the Bucs had a good offense mainly due to quarterback, Ryan Fitzpatrick, and deep threat, Desean Jackson. Winston played 11 games last season, and threw 19 touchdowns and 14 interceptions. Winston started his 2019 campaign off bad, and will look to improve this week against Carolina. Carolina’s defense is ninth against the pass so far this season, but their pass rush was not as dominating as they had hoped. If Carolina can’t get to Winston, he will be more effective.

Ronald Jones had one of his best games last week, and will look to keep it going against Carolina. Last week, Todd Gurley had a pretty good day on the ground, as he had 14 carries for 97 yards. Bucs coach, Bruce Arians, will look to capitalize on the Panthers’ bad rush defense. Hopefully, Carolina will get better against the run this week.

Last week, Mike Evans was contained by San Francisco, and he would like to get more involved this week. Carolina corner, James Bradberry, usually shuts Evans down or limits him in every game. Last week, Chris Godwin, was Winston’s number one target. Godwin is a player to watch in this matchup, so look for Donte Jackson to cover Godwin quite a bit.

Tampa’s defense only had five total pressures against the 49ers, and will look to get to Newton more. Tampa’s secondary looked lost at times last week, but they do have some playmakers. Devin White and Lavonte David are talented, speedy linebackers who are capable of making plays against the pass and rush. It’s going to be a hard, uphill battle for this defense, and they just don’t appear up for the job.

Run the ball early and often.

The Bucs come into this game relatively healthy, as they only have the backup quarterback out this week. The Panthers are still without newly signed linebacker, Bruce Irvin, as he is still dealing with a hamstring injury. Gaulden and Olsen are both questionable, but Olsen said he’s playing. With Irvin out, look for Brian Burns and Marquis Haynes to get extended work. If Olsen can’t go, Ian Thomas will get a lot of work.

Even though Tampa beat Carolina in their last meeting, don’t expect it to happen this week. Carolina’s pass rush will get to Winston consistently and pressure him into 2-3 turnovers. The Panthers run defense will tighten up and only allow 75 total yards against the Bucs. The Carolina offense will have success and take this game at home on Thursday night football, 28-13.