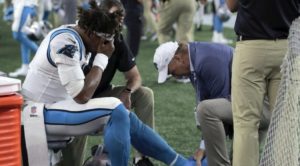 So…..Here we are again. Another preseason game, another injury. Cam Newton has a left ankle injury that he sustained late in the first quarter. Cam got hurt on a coverage sack while scrambling to try and keep the play alive. When Cam got up limping, you could almost hear every Panther fan’s heart sink. It begs the question, should franchise players play in the preseason?

For the most part, all players get an opportunity to play in these preseason games, including starters. The starters generally play no more than a half in any preseason game. It seems like more and more starting caliber players get hurt each year in preseason action. Yes, it’s good for starters to play and become a cohesive unit. However, it isn’t necessary to put your franchise players in harm’s way.

Yes, injuries happen. Especially in a gladiator sport such as football. If a player is going to get hurt, it should be in a game that means something. The risk far outweighs the reward.

Cam Newton and Greg Olsen are coming off of injuries that required surgery. These two players have worked hard to get healthy enough to play for the Panthers and shouldn’t be in a meaningless game such as this. These players are professionals and will be ready for the regular season no matter what. The preseason should be designated for rookies and players trying to make the team. The franchise players for NFL teams shouldn’t be playing in games that mean nothing.