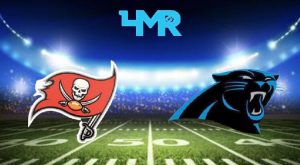 The rivalries have ran deep in the NFC South ever since it was formed in 2002. Tampa Bay and Carolina’s rivalry is talked about the least, but it’s a rivalry nonetheless. The two teams have played each other 37 times since Carolina’s inaugural season in 1995. Carolina leads the all-time series 23-14. The Panthers and Bucs have played each other less than the other rivals because they weren’t in the same division until 2002.

These two teams have had some dog fights over the years, but the most heated ones came in the mid-2000s. Players from those teams have been quoted as saying that they were some of the most physically and mentally draining games in their career. Carolina legends Jake Delhomme, Stephen Davis, Steve Smith, Muhsin Muhammad, Brad Hoover, Mike Rucker, Julius Peppers, Dan Morgan, Kris Jenkins and Mike Minter battling against the Bucs legends Warren Sapp, Simeon Rice, Derrick Brooks, John Lynch, Ronde Barber and Mike Alstott. 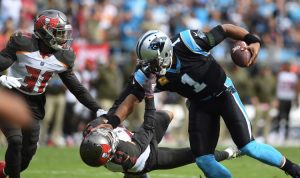 In the years since Cam has been in the league, Carolina has all but dominated Tampa Bay. Carolina has won 11 out of 16 games by an average of 16 points. In the 5 Tampa wins, they averaged 5 points per win. It should be noted that two Carolina wins and one loss was with Derek Anderson starting at quarterback. In the last eight years, Carolina has scored a total of 417 points against Tampa, while Tampa has only scored 269 points against Carolina in the same time span. The Panthers have swept the Bucs in five of the last eight years.

It’s hard to tell what Tampa will do this year, but on paper they have a decent roster. New head coach, Bruce Arians, has always had a knack for getting teams to overachieve. Tampa did little to upgrade their roster during the offseason. Tampa’s notable transactions:

Barring any major injuries, Carolina should do well against the Bucs. Marty Hurney upgraded the Panthers significantly this offseason, and they look to build on the promising start they had in 2018, where they started the season 6-2. Carolina’s notable transactions:

The expectations for 2019 are that Carolina sweeps Tampa Bay. When you compare both sides of the ball, Carolina dominates on paper. If Cam Newton stays healthy, he is far and away better than Jameis Winston. Here is a comparison of key players from both teams:

There’s no doubt that McCaffrey wins this matchup in regards to offensive production. He is a Pro Bowl Caliber running back, who is an asset in the running game and passing game.

Evans wins this matchup based purely on his dominance and the unknowns about Samuel. Samuel was the 2019 training camp MVP, but this isn’t based on potential. Samuel is very talented and has all the tools to be a special player. Time will tell….

Last season, Howard had 34 receptions for 565 yards and 5 touchdowns in 10 games. 2 of those touchdowns came against Carolina in week 9.

Word out of Tampa is, Howard will be used even more this year in the passing game. Olsen has had a healthy offseason and looks to come back strong this year. With so many unknowns about both players, Olsen and Howard are tied in how much of an impact they’ll have in these games. Hopefully, Olsen will be back to his old self.

Tampa’s defense was one of the worst in the league, as they were ranked 27th in yards allowed and 31st in points allowed.

Carolina’s defense should be much improved this year, with the additions of Gerald McCoy, Bruce Irvin, Brian Burns, Tre Boston and Javien Elliott. Carolina will also have a multi-look defense instead of a base 4-3 like in year’s past, so it will be interesting to see how much of a pass rush will be generated this season. Tampa’s defense didn’t change much, as they added rookie linebacker, Devin White, and essentially swapped Gerald McCoy for Ndamukong Suh. Barring any issues for Carolina, the Panthers’ defense should dominate against the Buccaneers.

Things rarely go as planned in the NFL. If Carolina stays healthy, they should no doubt sweep Tampa Bay, and convincingly. Even though new head coach, Bruce Arians, is a great coach, the fact that the entire coaching staff was replaced this offseason, puts them behind from the beginning. Although, anything can happen.